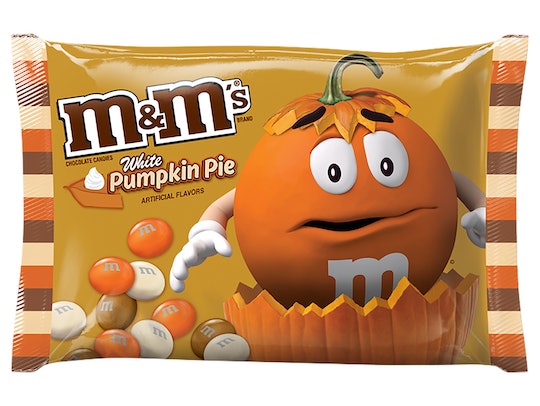 You guys are probably going to hate me for this, but summer is over. I know what you're thinking, Hold up I was just at the beach, like, yesterday. I'm still wearing shorts and I sort of have a tan. It has to be summer. I had all of these same thoughts, but it seems we were all wrong. Because white pumpkin pie M&M's are here, and I guess that means it's time to break out the decorative scarves and make plans to go apple-picking. Because the harbinger of fall has arrived.

Despite the fact that the calendar clearly says August, Mars, Inc. dropped their newest flavor of M&M's in Wal-Marts across the country last week (although the white pumpkin pie M&M's have been available through the Candy Warehouse site since April). This new flavor is reportedly a white chocolate filling infused with pumpkin pie spice, in other words it's the food equivalent of chunky sweaters and skinny jeans and slouchy hats. All of which sounds great, of course, but it's not October. Those are all October things. And like other October things (raking colorful leaves, apple-picking, Halloween) they're amazing because they're time-sensitive. We look forward to our brief, autumnal love affair with all things pumpkin. But, like, in the fall. I mean, even the M&M on the packaging looks a little bewildered.

Mars, Inc. isn't the only company out there jumping the gun on fall; it seems Starbucks is attempting to ply us with pumpkin as soon as possible. According to a press release:

No. Or at least, not quite yet. Soon, though. Very soon.

Now that we are entering official pumpkin-flavored season, I suppose there's no turning back. If you can't beat 'em, join 'em. So I suppose it's time to embrace the sweet, sweet taste of pumpkin. Maybe try a handful of those white pumpkin pie M&M's on an ice cream sundae. Or bake some cookies. Or grind them up on throw them in a milkshake. Or mix them with several other M&M's (like the pretzel ones, because that would be amazing) and just eat them in the raw while Netflix-ing.

I mean, what's so great about summer anyways?