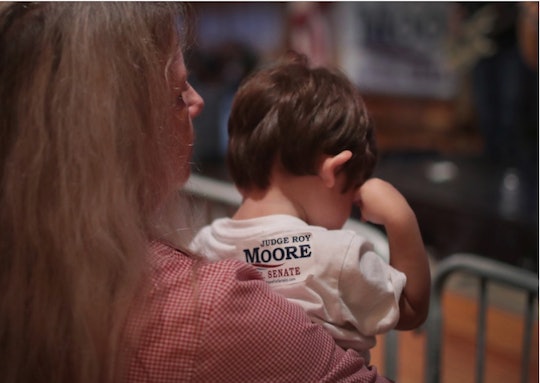 Yesterday, moms who look like me once again voted for a man we would not trust to leave alone with our daughters. Last night around 11 p.m., when it looked like those votes would, thankfully, miraculously, fall short, I stepped into my daughter’s room to kiss her goodnight. “Sweetie,” I said, as I sat on her bed and smoothed her hair back, relishing this moment, on the cusp of sleep, when my 14-year-old still feels like my little baby girl. “You know that special election in Alabama?”

“Yes!” She said, her eyes bright and worried. “The crazy rapist against the Democrat?”

I paused. Well, yes, Roy Moore has been accused of sexually assaulting a 14-year-old girl, among other things, like attempting — or actually having — “relationships” with many underage girls, which as we all know is legally, clearly, rape, so yes, “crazy rapist” feels right.

“It looks like the Democrat won!” I said, happy, but less elated than I had been a few moments before, sitting on my couch in New Jersey, frantically refreshing the screen on my iPhone, almost not daring to believe the “great news.”

“What?!” cried my daughter, nestled into her flannel pillows, a mini Christmas tree decorated with cupcake and Pusheen ornaments twinkling on her nightstand. “That's amazing! Wow!”

I think of all the moms and daughters across our nation last night, and on a similarly alarming night last November, and feel sick to my stomach. Because while it’s tempting to look at a stat like this —

— and feel like the moms of the country, at least, are waking up, the truth is that white women, including white moms, really aren’t. Still — still — white women like me are voting as we have historically done: with the status quo, with our white husbands, white brothers, white fathers.

"Is this real? I can't believe it!" I had posted on Facebook before heading upstairs, as soon as the Associated Press called the election. Glee!

But the feeling faded.

Both my daughter and I thought the "crazy rapist" would win. My daughter, who is 14, knows it was an incredibly close call. My daughter, who I hope knows that I would try to strangle to death a man who tried to do to her what Leigh Corfman has accused Moore of doing (with my bare f*cking hands), also knows that this country is filled with people, including the actual president, and including moms just like me, who think it’s OK that a man sexually assaulted someone exactly like her.

Who would give that man a position of power?

We know that 63 percent of white women voters in Alabama — many of whom must have read Corfman's story, must have known that Moore was once reportedly banned from a shopping mall thanks to his predatory behavior toward teenage girls — voted for this man.

According to the Washington Post’s Alabama voter exit poll Tuesday night, “By a roughly 20-point margin, more female Alabama voters said allegations of sexual misconduct against Roy Moore are true than said they are false.”

Put that another way. "Most" female voters polled believe that Roy Moore sexually assaulted a 14-year-old girl, and 63 percent of white women in Alabama voted Republican. Many of them knew the truth, and they voted for him anyway. Thirty two percent of voting moms chose Moore. These are mothers like me, with children under 18 in their homes. Given nearly 100 percent of black women voters cast their ballots for Doug Jones, it’s safe to say that nearly all of those moms who voted for Moore were, also like me, white.

Black women and moms did not vote for an alleged child molester, and we have them to thank for this victory. Black moms did not vote for man accused of violating the trust of women just like us, of preying on daughters just like ours, an accused pedophile who not incidentally also believes that repealing all amendments to the constitution that came after the Bill of Rights "would eliminate many problems." This, obviously, includes the amendment giving women like me, like my daughter in a few years, the right to vote (19th), along with, you know, that pesky amendment abolishing slavery (13th).

This white female support of a man who is so clearly against our own interests (let alone the interests of our non-white sisters and brothers) mirrors the large number of white women who voted for Trump 53 percent to 43 percent in the November 2016 election despite everything, everything that he told us about himself.

Not me! I think. I voted for Obama in the 2008 primary! I donated to Hillary! I have a recurring monthly donation to The Trevor Project! I am white and straight but I am an ally!

As for the white moms in Alabama, how many of them believed the accusations to be true? And voted for him anyway?

How many of us believed everything we heard about Trump, in our hearts, yet still voted for him?

White moms, white women: Why are we still supporting this white male power structure that does not serve the majority of our country's citizens, including ourselves, including our children?

Why are we not doing the same work that black and other minority women are doing?

What does it take?

I will be honest. When I see statements like this one above, tweeted by a fellow writer and mom whom I greatly respect, my first reaction is defensiveness.

Not me! I think. I voted for Obama in the 2008 primary! I registered voters in Pennsylvania last year! I donated to Hillary! I have a recurring monthly donation to The Trevor Project! I am white and straight but I am an ally!

I’m one of the good ones, I want to tell myself.

But the thing is… so many moms like me think we’re one of the good ones. Even the moms who voted for Trump. Even, yes, the moms who voted for Moore. Very few of these women are rubbing their hands together as they cast votes for someone just to be evil. They're telling themselves that they just can't go against their beliefs about abortion. They're telling themselves that this is the kind of man who can keep them safe, and protected. They're simply upholding the status quo — a status quo that has been so, so carefully constructed over years and years and years to make all of us white women feel cushioned and protected.

And what about those of us who are liberals? Who did vote for Hillary, who want to believe we're on the good side. What is it that we are missing? What should I be doing differently? Because it's NOT just "them." It's us. It's me.

Why is it so hard for us to realize, as a group, that we have so much power as white women, even if we feel more attacked than empowered right now? Because that feeling that we aren't “on top of the pile” any more... that’s because men like Moore are still in charge, at the very tippy top, thanks to us.

There’s a better way to use our power, and that’s to align ourselves with the women of color who are making change, who are doing the work to move this country forward, despite all of the obstacles they face, and have faced.

“None of this is simple; none of it is easy; it’s increasingly difficult to parse and to live through," writes Rebecca Trasiter at The Cut, in her exploration of the shifting, messy, confusing struggle we find ourselves embroiled in right now, as we come up against "the rot at the core of our power structures that makes it harder for women to do work because the whole thing is tipped toward men."

The difficulty is that for many of us, white men are what we know. We married them, work for them, are raising them. Even if we take exception to the Roy Moores once in a blue moon, we for the most part see them as partners, as allies.

“I thought, how nice for him to want to take care of my little girl,” Corfman’s mother, Nancy Wells, 71, told theWashington Post of the time she and her daughter, 14, met Moore, then a 32-year-old assistant district attorney. Nancy and Leigh were sitting on a wooden bench outside a the courtroom in Etowah County, Alabama, waiting for a child custody hearing, in 1972.

“He said, ‘Oh, you don’t want her to go in there and hear all that. I’ll stay out here with her,'” she recalled.

What a nice man.

Nancy's daughter's subsequent story of sexual assault is just one of many.

These men are not our allies. We owe them nothing. When we tuck our children in at night — including those on the cusp of adulthood, just about venture into the sex and power vortex — we need to know that we have done everything we can to build a world that will respect and protect them. A world in which their words will be heard, and believed. A world in which the "crazy rapist" never had a shot in hell.

More Like This
This Is What It’s Like To Parent With OCD Right Now
Can Elderberry Help Prevent Illness In Kids? Doctors Weigh In
What Is RSV?
I’m A Mom Who Will Never Own A Home