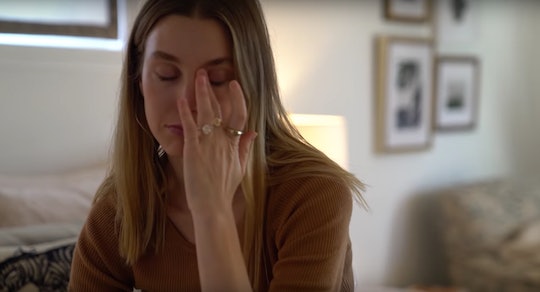 Mom-shamers are everywhere: At the park, on social media, and even at mom events, apparently. In fact, Whitney Port got candid about "mom bullies" in an emotional new video she shared on her YouTube page, detailing her distressing experience. It's not only upsetting to hear Port's story, but it also serves a stark reminder that no one — not even celebrities — is immune to this kind of behavior.

In a video posted on her YouTube channel — called "Mom Bullies Can F Off!" — Port recalled arriving at a baby event "with a good attitude," adding that she "walked out feeling a little bit insecure," as People reported. She noted in the video that a lot of mothers she personally knew were at the event, so she approached two of them and was greeted with a less than warm reception.

In the video, Port described the "mom bullies" as "passive-aggressive" bullies, not the "in my face, calling me names or stealing my lunch money" type. She said, "I got the same reaction from both of them which was, 'I really cannot be bothered talking to you right now' and they were trying to back out of the conversation as quickly as they could."

Through tears, Port claimed the other moms at the event were doing "the least amount possible to get by" without making it known that they wanted "nothing to do with her." Port added, "I can see right through that."

Port — who gave birth to her first child, a boy named Sonny, in 2017, according to E! News — went on to explain in the video why the run-in was so upsetting to her: "It's especially hard when you're a new mother and you really want to put yourself out there because this is the time to make lifelong relationships."

The former The Hills star suggested in the video that her reality TV fame may have tainted the way other moms view her, explaining:

If I'm not cool enough for them because I was on a reality TV show, then they're not gonna try to be friends with me. It hurts to feel like someone doesn't want to hang out with you or have a conversation with you or and try to get to know you. I take it personally.

Port then sent a message directly to the "mom bullies," admitting that she wanted them to know they "hurt" her feelings, while adding the whole thing was "so silly" and, perhaps most importantly, that "it's so easy to be nice to people."

"They probably never even thought about [being mean]," she said, before adding that she thinks she bullies herself because of her experiences with mean moms. "I need to stop telling myself this narrative. The problem is I'm bullying myself... I think I'm worthy of people being nice to me but I can be quiet and awkward."

Port added that she "can't control the way anybody acts" but that shouldn't stop her from putting herself "out there." She explained, "I just have to work on my own self-esteem and focus on the positive qualities about me as opposed to the negative."

Port has been open about her struggles in motherhood in the past, which can make her a target for mom-shaming. In September, for instance, Port told People that she felt guilty for making parenthood "out to be the scariest, most brutal thing of all time." The comment appears to be a reference to her honest YouTube series called "I Love My Baby, But...," in which she speaks often about her very relatable trials and tribulations in parenthood.

Except for her latest vlog, comments have been disabled on most of Port's YouTube videos. Even so, it's clear from the number of views that a lot of other moms out there can relate; the majority of her YouTube videos have anywhere between 36,000 and 97,000 views.

Speaking on her decision to be "brutally honest" about parenting initially, Port told HuffPost, it was actually her husband's idea, noting that in her first video ever, she was "in bed with crusty yogurt around my mouth, totally disheveled." Port told HuffPost, "And we put it out there and the response was crazy."

More and more celebrity moms are confronting "mom bullies" and mom-shamers publicly, showing regular moms everywhere that they're not alone in dealing with this kind of behavior. It probably won't stop anytime soon, but it's nice to know you're not struggling alone.