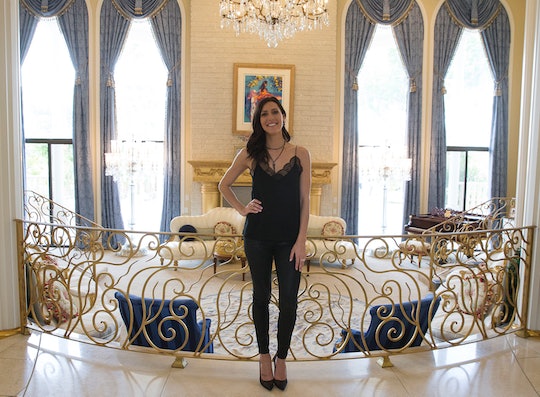 While it seems like The Bachelorette just started, it's sadly soon coming to an end. Now that hometowns are over and done with, who are Becca's final three on The Bachelorette? These are the guys that she'll take to the fantasy suites and honestly, I think she's chosen correctly (well, for the most part).

Let's start with my favorite: Blake. According to his ABC biography, Blake is a sales representative from Colorado. "Blake considers himself a modern romantic who believes that two people need to be independent in order to truly love each other, so he's looking for his equal match," his bio states. "Born and raised in small town Bailey, Colorado, Blake was both a high school and collegiate athlete. Despite excelling at football and basketball, Blake has a secret talent... he's a great swing dancer! Blake is hoping to sweep the Bachelorette off her feet!"

Blake impressed me from the very beginning when he received the first one-on-one date of the season, which was the most unique date: smashing Arie's things while Lil Jon rapped about it. Becca was smitten from the beginning, and while Blake had to wait a while for his second solo date, it was well-worth it. Blake says he's in love with Becca and while she hasn't told him yet, she feels the same way.

Next up, let's discuss Jason. Jason has had a different journey on The Bachelorette. He's had to wait awhile for his first one-on-one, but finally got it when he and Becca did some fun (if not random) activities in Richmond, Virginia. Jason is definitely the sleeper of the season. Becca went from forgetting his name to meeting his family! (No shade to Becca, that may have been the most relatable scene in Bachelorette history.) By now, Jason has also told Becca he loves her. After meeting Jason's family in Buffalo, she hasn't said it back to him — or said they're on the exact same page like she did with Blake — but she did give him the rose which means he's going to the fantasy suite in Thailand, baby.

Finally, there's Garrett. Garrett has been a frontrunner from the beginning because he received the first impression rose. His first impression with Bachelor Nation, however, was not quite as positive considering it was revealed that Garrett "liked" offensive social media posts online. Garrett has since scrubbed his social media accounts and apologized but the internet never forgets.

In an interview with ET, Becca revealed that she fell in love with two men this season. "I did develop really strong feelings for a couple of them and I did fall for two guys at the end, yes," she said, and teased, "You'll have to wait and see." I can't help but think about how ironic this is, considering her ex Arie also fell in love with two women — including her — and that's the exact reason she's The Bachelorette. She did give an explanation for why this is, though: "Until you're in this position, you don't realize how much pressure there really is, and how difficult it is to navigate certain relationships."

I'm not The Bachelorette but I can see how that happens. Well, Bachelor Nation knows the two men she fell in love with are among her final three, so everyone will have to catch who makes it passed the fantasy suites and into the finale. This season is wrapping up way too quickly for me, but at least I have Blake and Jason to watch to make it all worth it.