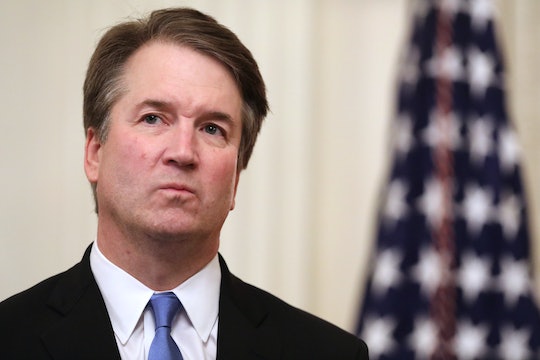 Today, Oct. 9, is Supreme Court Justice Brett Kavanaugh's first day on the job, and already he's making waves. Keeping his confirmation hearing promise, Kavanaugh hired four female court clerks to his team and he's the first Supreme Court Justice to ever do so, according to CNN. So, who are Brett Kavanaugh's law clerks? This act put him square in the history books, but it will not diminish his previous entry as one of the most contested nominees ever. With that said, here's what you need to know about his team.

His all female clerk appointment comes on the heels of a widely publicized, and criticized, confirmation process where several women came forward to accuse Kavanaugh of sexual assault and misconduct, according to the Washington Post. He continues to vehemently deny all allegations, as TIME reported. The most visible of these women, and the first to come forward with allegations, is Christine Blasey Ford, who testified in front of the Senate Judiciary Committee.

For the first time in American History, more than half of the nation's clerk will be women, according to The New York Times. Three out of the four clerks all worked for Republican appointed appeal court judges, according to The Hill. According to CNN, Kavanaugh's all female staff includes the following clerks:

Thousands of hopeful, experienced, law school graduates put in their applications for clerking at the Supreme Court each year but, only 36 are chosen, according to Chambers Associates.

Clerks play a tremendous role for their Supreme Court Justices, according to Cockle Legal Briefs. They wade through cases and help make recommendations on which the court should consider. They also do their fair share of researching for upcoming cases and help their justice prepare for oral arguments. Basically they are doing all the behind-the-scenes work that is integral to the successful performance of the court.

During his 12 years as a federal judge, women made up the majority of his staff hires, an act Kavanaugh supposedly did to balance out representation within the justice system, according to The Hill. But many critics believe that it will take much more than hiring all female clerks to take away the damage done from his contentious confirmation hearings. Elizabeth B. Wydra, the president of the Constitutional Accountability Center, told The New York Times:

I applaud in general a commitment to hiring a diverse group of clerks, and hope all the justices encourage applicants of color, women and those with backgrounds beyond the usual elite. Unfortunately, it’s going to take a lot more than female clerks to undo the damage to the legitimacy of the court done by this travesty of a confirmation process. Women will feel much more confident in the court when their fundamental rights are protected and their equal dignity is respected in the rulings handed down by the justices.

Kavaugh's nomination and subsequent confirmation may be one of President Donald Trump's most lasting legacies. Kavanaugh is replacing Justice Anthony Kennedy, who was a notorious swing voter who didn't vote along party lines. Now with Kavanaugh in place, ruling could fair more to the left as the majority of sitting judges are Republican, according to CNN.

Although there are no specific big item votes on the calendar this year, there are some significant issues are on the line including LGBTQ rights, the Affordable Care Act, the Deferred Action for Childhood Arrivals, according to the Los Angeles Times.

Kavanaugh was confirmed to the Supreme Court on Saturday, but this has not stopped protestors from speaking out or taking action to reverse the decision. "Brett Kavanaugh may look the part when he dons the robe, but Kavanaugh will be an illegitimate justice for as long as he sits on the Court," Director of Demand Justice, Brian Fallon told CNN.

Only time will tell how well Kavanaugh and his staff of all female clerks will work together in the coming years. And, judging by the continuing flow of controversy following Kavanaugh around, more news is soon to follow.