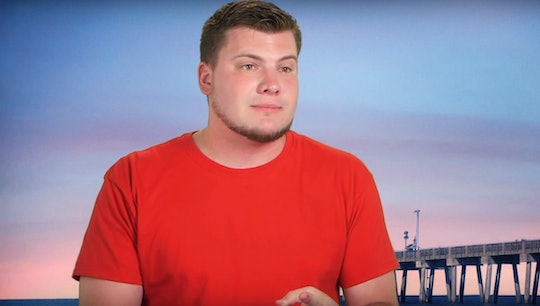 There comes a time in every reality star and fan relationship where the viewer gets to meet the parents. On Jersey Shore, fans got to know some of the stars’ families and have since held soft spots for characters like Vinny’s mom and uncle. Now, Codi’s mom and pop are about to make their debut on Floribama Shore. Before Thursday’s episode is over, viewers are definitely going to be wondering, who are Codi’s parents on Floribama Shore and can they adopt me? Judging by the promo for Thursday’s episode and a sneak peak posted on Twitter, Codi's parents already seem like a lot of fun.

In the clip posted on Twitter, Codi lights up as he talks to his dad on the phone and learns that his parents plan to make the trip down to the beach house to see him and meet his roommates. When he asks his dad if they plan on drinking, his dad replies, "Hell yeah," which is the only answer you could hope to expect.

"That’s gonna be the best day ever," Codi tells the camera. "My parents are the coolest parents in the world. My roommates are in for the biggest treat of their lives when they see my mom and dad." If my adult son ever gets that excited to have me and my husband crash his ongoing house party full of 20-somethings, I’ll have done my job as a parent.

Although there isn't much known about Codi’s parents since their current Instagram profiles are private, there are a few pictures on Codi’s own Instagram that show just how close he is with them in real life.

On Dec. 26, Codi posted a photo of himself with his parents and some other friends or family with the caption, "A family that drinks together stays together." You can't say they don't know how to have a good time. There are other random photos littered throughout his Instagram that show him bonding with his parents. Since he seems this excited to have his parents visit the Floribama Shore house, I'd say their bond is pretty legit.

Codi’s sister also posts pictures of the two of them with their parents on her Instagram fairly regularly. Honestly, I’m just ready to be adopted into the family already because they look like they have a lot of fun no matter what they’re doing. Though to be honest, I wouldn't say no to meeting up with them at a bar.

Before now, Codi hasn't talked about his family much on Floribama Shore other than to say how close they are, but that seems to be true for most of the cast members and their close southern families. Like the cast of Jersey Shore, who took pride in their close familial bonds and were quick to invite parents or extended relatives to the Shore house, the Floribama Shore cast takes pride in how close they are to their own families. Kortni had never lived anywhere besides home with her parents before she came on the show and Jeremiah grew up with a large close-knit family and was home-schooled as a child, which he’s spoken about on multiple occasions. It's no big surprise that Codi is so close to his own parents.

Since Codi is such a new reality star himself, his parents have remained separate from the show. When the Floribama Shore cast and viewers meet them on Thursday’s episode, however, they’re going to be thrust into the spotlight in a major way. If they’re anything like what Codi says they are, they’ll be fast fan favorites.