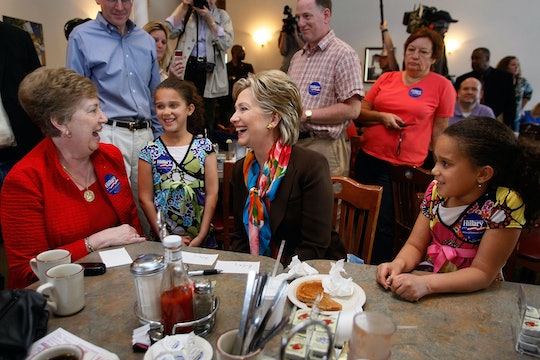 Who Are Hillary Clinton's Grandchildren? There's Another One On The Way

While campaigning to be the Democratic presidential nominee, former Secretary of State Hillary Clinton has made it a point to proudly refer to her grandmother status and her adorable grandaughter, Charlotte. (As she should.) Now, it seems that Hillary Clinton's brood of grandchildren — or rather, "grandchild" — is about to get a little bigger... meaning that little Charlotte will be forced to share all those toys with a sibling. (Sigh.)

As of right now, former first daughter Chelsea Clinton has one daughter and is pregnant with the Democratic candidate's second grandchild. Chelsea,gave birth to Clinton's first grandchild, Charlotte, in June of 2015. Just after welcoming her first child into the world last summer, Chelsea and her husband Marc Mezvinsky announced that they were already expecting baby number two in December. The couple made the announcement on Twitter, saying that Charlotte would become a big sister come summer 2016. "Next summer, Charlotte is going to be a big sister!" Chelsea wrote that month. "Feeling very blessed & grateful this holiday season." Following the exciting, announcement, Clinton excitedly tweeted back to her daughter. "Your dad and I could not be happier for you, Marc, and Charlotte," Clinton wrote. "We’re so excited to meet our second grandchild!"

The presidential hopeful has used her daughter's experience and her own grandmother status to connect with voters in the primary cycle leading up to the Democratic Convention. Her campaign website itself has a section about how the candidate has many things in common with "your abuela," the Spanish word for grandmother.

It's clear from her own words that Clinton takes her family roles just as seriously as her political ones. But political skeptics have since seized on the opportunity to use Clinton's words against her, calling the Democratic candidate out for exploiting her experience as a mother, and now grandmother, for political gain. It's hard to deny that she doesn't have her family, grandkids included, on her mind when she's campaigning, but perhaps that's not such a bad thing. During the first Democratic debate in October, Clinton spoke positively about her family, saying,

I'm the granddaughter of a factory worker and the grandmother of a wonderful 1-year-old child. And every day, I think about what we need to do to make sure that opportunity is available not just for her, but for all of our children. I have spent a very long time — my entire adult life — looking for ways to even the odds to help people have a chance to get ahead, and, in particular, to find the ways for each child to live up to his or her God-given potential.

There are lots of ways to analyze the way a politician speaks about her family. However, Clinton's words don't change the fact that the Clinton family in general have plenty to be excited about as they get ready to welcome another child into the world. In all honesty, it might be even more thrilling than, you know, campaigning for a presidential nomination.