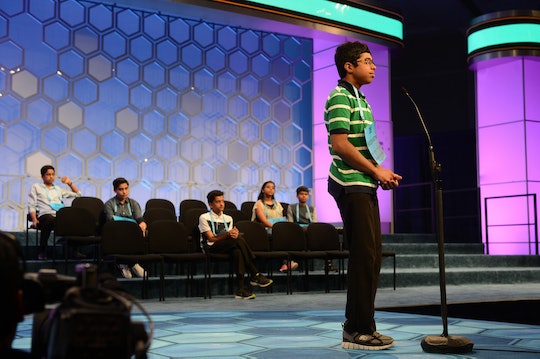 Who Are John & Jonathan From St. Johns? Spelling Bee Sreeniketh Vogoti Called Them Out

Already, we are loving young Sreeniketh Vogoti at Thursday night's "World Series" of spelling bees, the Scripps National Spelling Bee. The confident kid stepped up to spell his word and had a shoutout to give. Curiously though, after taking to the stage, Vogoti said, "First I have to do something, because I promised them this. I want to give a shoutout to John and Jonathan from Saint John's." And now everyone is left wondering: Who are John and Jonathan from Saint John's?

Sreeniketh Vogoti got off to a rocking start at the Scripps National Spelling Bee on Thursday. The Saint John's, Florida seventh grader is a fan of spelling (and has been ever since he won a spelling bee in his hometown with barely any studying, who doesn't love being awesome at things naturally, right?) as well as chemistry and math. According to Vogoti's brief bio on the Scripps Spelling Bee website, he ranked 10th in the country in the International Math Kangaroo competition in the fourth grade. While Vogoti's first love is science (he plans to be a scientist some day), he is a true renaissance man. He likes to dabble in a little poetry, plays the clarinet and enjoys a round of tennis with his chums every now and again. You know, for a balanced lifestyle.

At this point, Vogoti is still in the spelling game. He has correctly spelled the words "zwitterion"and "moshav" correctly, while his poor father watches nervously. And you know who else could be watching? John and Jonathan from Saint John's (you thought I forgot about them, didn't you?).

So he could these two elusive chaps be? Vogoti is too busy spelling and possibly getting in a quick round of haikus backstage to share with us, so I'm going to share some of my ideas. I'm wondering if John and Jonathan are fellow billiards players from back home in Saint John's (did I forget to mention that Vogoti is also a fan of carom billiards?). I can picture the two of them now, in a billiards hall with some friends with the Scripps Spelling Bee blaring in the background. When their buddy got up to give them his national shout out, they might have chuckled to each other. "Oh, that Sreeniketh. It looks like we each owe him a dollar!"

John and Jonathan could be some kids who challenged him, who told him he would never make it to the big time of spelling. And Vogoti just delivered a Karate Kid-style smackdown. Or maybe they don't exist. Maybe it was just a clever play on words from the brilliant mind of a young renaissance man. Time will tell.

Meanwhile, it looks as though Vogoti has spelled his last word of the night for us. He did well, and with all of his interests and hobbies, will probably be running the world some day so let's not feel too awful for him, right?

At least now we might find out who John and Jonathan from Saint John's are.