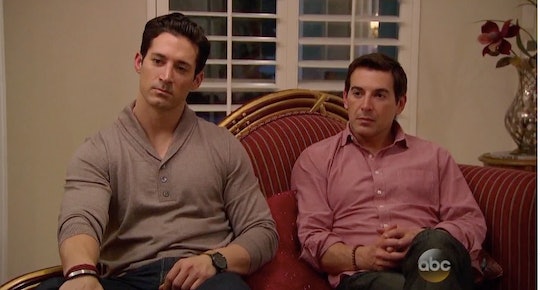 Who Are JoJo's Brothers? They Might Not Be 'The Bachelor's Biggest Fans

Picture this: You're bringing home an adorable man to meet your parents. He's a little nervous, a little shy but in that sweet way that makes most women turn to mush. Your mom bakes some cookies maybe, your dad is quiet but affable. And your brothers... well, your brothers might be asking some awkward questions. Like "Why are you dating so many women, Ben?" or "Isn't my sister enough for you, Ben?" or "Do you think anybody believes those crocodile tears of yours, Ben?" With that in mind, Bachelor fans are probably asking themselves: Who are JoJo's brothers, and why do they seem to be so wary of Bachelor Ben?

We haven't seen episode eight of The Bachelor since it won't air until Feb. 22. on ABC, but I'm really hoping we get to hear a few awko-taco questions from the families. This will be the episode when Ben Higgins will finally meet the families of the remaining four ladies (otherwise known as "hometown dates week").

The last gals standing are Amanda Stanton, Caila Quinn, JoJo Fletcher and Lauren Bushnell. Word on the street is that Lauren and JoJo are odds-favorites to win Ben's tender heart so I'm dying to see what their families have to say. Who are these poor, unsuspecting folk who are about the be thrust into the limelight? What do they think of our erstwhile hero? Any chance someone might duke it out? Look at JoJo for instance. She has brothers. Who are these brothers of JoJo? Will they buy Ben's "What? Who me?" act? Or will they question him with fisticuffs in true brother fashion?

It turns out JoJo (or Joelle as she was actually named) has another reality star in the household. Her brother Ben Patton was a bachelor himself on the show Ready For Love on NBC in 2013. He got engaged to beauty queen and proud virgin Angela Zatopek at the end of the season but, strangely, the match did not last. So he may know a thing or two about the crazy world of televised dating. He now spends his days as an entrepreneur in Dallas, TX being cool and hanging out with famous people.

JoJo's other brother Martin is less famous but apparently just as protective. Seems he might not care for Bachelor Ben and the patented scorched earth dating policy we've all come to know and love on The Bachelor to whittle his number of hot ladies down from 25 to the Final Four.

If internet rumors are to be believed (and they soo are) JoJo's brothers might ask Ben a few hard-hitting questions themselves. In early previews, viewers caught a glimpse of Ben and Martin, who were none too happy with Bachelor Ben. For some weird reason, they seemed to think he had been "brainwashing the girls too much." (So says brother Martin.) "She deserves better," said JoJo's brother Ben.

This could all be a clever editing trick designed to make us all watch episode eight of The Bachelor like we weren't already going to anyways. But let's be honest, I'll definitely be tuning in now that I've had a peek at JoJo's family! According to Ok! Here's the Situation, JoJo's dad, Dr. Joseph Fletcher, is a gastroenterologist (colonoscopies and such) and her mom is an Iranian woman named Soraya who advocates on behalf of racial equality for Middle Eastern people. I'm guessing JoJo got some of her kind-heartedness from her mom. Also her looks, have a gander:

So let's all tune in to see if this gorgeous family gives our Ben a run for his money... and his girl.