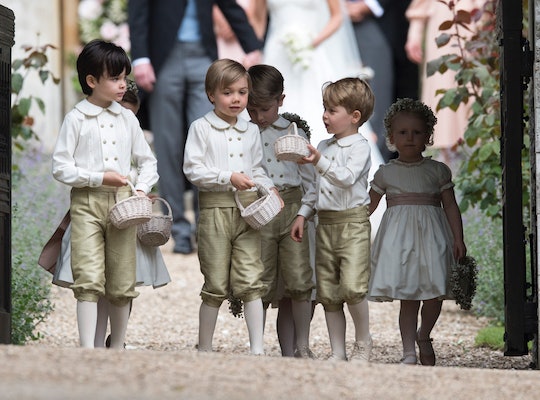 Meet The Page Boys Of The Royal Wedding, The Small Tots Who Are Following The Procession

Watching the royal wedding is kind of like a who's who of British society. You've surely spotted a regal Queen Elizabeth in today's crowd and no doubt you're on the lookout for what the Duke and Duchess of Cambridge are wearing. You may have even spotted a few celebrities, like Serena Williams or Elton John. But you also might be watching and wondering about the adorable gaggle of children preceding Meghan Markle's entrance. Some of them are flower girls, but who are the little boys in the royal wedding? It turns out they have a very specific title.

Even before you saw their sweet faces today, you probably could have already guessed that Prince George and Princess Charlotte would play a role in the big day. In fact, in May 2017 you might have sneaked a preview of what's to come when the brother and sister duo walked down the aisle at Pippa Middleton and James Matthew's wedding at St. Mark's Church in Englefield, Buckinghamshire.

Kensington Palace confirmed days before the wedding just who would be walking as a page boy in the royal wedding. And, there are a few familiar faces in tow. First, His Royal Highness Prince George, 4, will be a page boy for his uncle and future aunt. Another page boy will be Jasper George Galloway Dyer, the 5-year-old son of Amanda Kline and Captain Mark William Galloway Dyer, "Prince Charles's former equerry, who served as a mentor for Prince Harry, particularly in the years following Princess Diana's death." Jasper is also one of Harry's godchildren. There's also Brian and John Mulroney, the 7-year-old twins sons of Jessica Mulroney, Meghan's friend and stylist. You will also spot Ivy Mulroney, 4, as a bridesmaid.

According to Vanity Fair, "the children of royal families have been taking part in royal nuptials for generations." The magazine said Queen Elizabeth was a bridesmaid for her uncle, the Duke of Gloucester, during his 1935 wedding to Lady Alice Montagu Douglas Scott. "She wore what looks like a very fashionable tutu (hardly something you could shorten and wear again, as they say)," according to Vanity Fair, adding that the queen's sister, Margaret, was also a bridesmaid and wore an identical outfit.

In fact, it's not uncommon for royal wedding page boys, bridesmaids, and other wedding attendants to be newsmakers themselves. Let's not forget 3-year-old Grace van Cutsem — the daughter of Lady Rose Astor and Hugh van Cutsem — who became known as "the grumpy flower girl" for pouting and covering her ears at the Duke and Duchess of Cambridge, Prince William and Kate Middleton's, 2011 wedding.

Even Prince George, at the time 3 years old, made headlines when paparazzi captured photos of the Duchess scolding him outside of Pippa Middleton's 2017 wedding ceremony.

One thing you are bound to notice today: The micro fashion will be on point. Page boys are known for wearing a pretty particular outfit, whether it is a collared shirt with trousers and a knee socks à la Pippa Middleton's wedding or something more official, like the outfits Kate and William's page boys wore in their 2011 ceremony. According to POPSUGAR.com, those getups were inspired by Regency-period Irish Guards officers, "the regiment of which William is the colonel."

So, yeah, in case you were worried about being bored by all the things at today's event, the little ones are sure to keep things interesting.