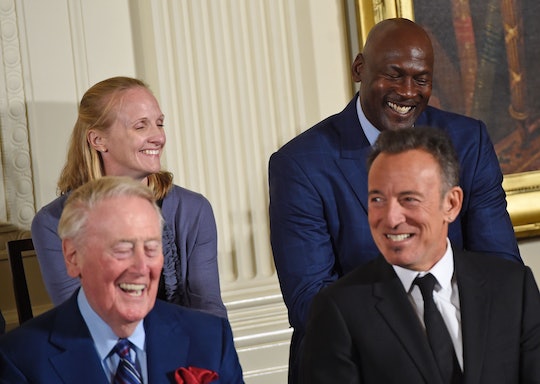 Who Are This Year's Presidential Medal Of Freedom Recipients? It's A Big Honor

As he prepares to leave the White House after eight productive years in office, President Barack Obama is both finalizing the trajectory of his legacy and striving to insulate it from the whims of his incoming successor. By awarding the Presidential Medal of Freedom to a diverse and influential collection of recipients for the last time Tuesday, the president made a strong statement about both. He bestowed upon 21 scientists, philanthropists, activists, athletes, artists, and more the United States' highest civilian honor — and, in doing so, reiterated the values he respects. And within that group are people who belong to demographics that the looming presidency of Donald Trump threatens — just as the Trump's plans for the nation could undermine Obama's proudest political accomplishments.

Obama warned while campaigning fervently for Trump's opponent, Hillary Clinton, that a Trump presidency would likely attempt to reverse "every single thing that we’ve done." And now, Trump is poised to do just that, which is perhaps made it all the more poignant for him to recognize representatives from groups that are most vulnerable, now that the KKK-endorsed president-elect, whose closest adviser is rumored to be a white nationalist, is about to become the leader of the free world.

Those recognized on Tuesday included Ellen DeGeneres, a comedian, talk show host, equal rights advocate, and a gay woman; and Kareem Abdul-Jabbar, the NBA's all-time leading scorer and a prominent Muslim American — a minority group that's under siege as Trump and his people continue to dehumanize them with talk of establishing a Muslim registry and a potential moratorium on allowing Muslim immigrants from entering the country, according to NBC News.

Obama also opted to recognize some whom Trump personally dislikes, such as Lorne Michaels, creator of Saturday Night Live and purveyor of the Trump impression that he so loathes. Another honoree, Rock and Roll Hall of Famer Bruce Springsteen, once called Trump a "flagrant, toxic narcissist," while actor Robert De Niro isn't shy about wanting to punch Trump in the face.

According to a Washington Post analysis, President Obama has awarded a higher proportion of Medals of Freedom to nonwhite recipients and women than any other president. It won't fix the damage that Trump has already done with his vitriolic campaign, but Obama's final Medal of Honor ceremony reinforces that the American spirit won't be stamped out by a hateful administration.