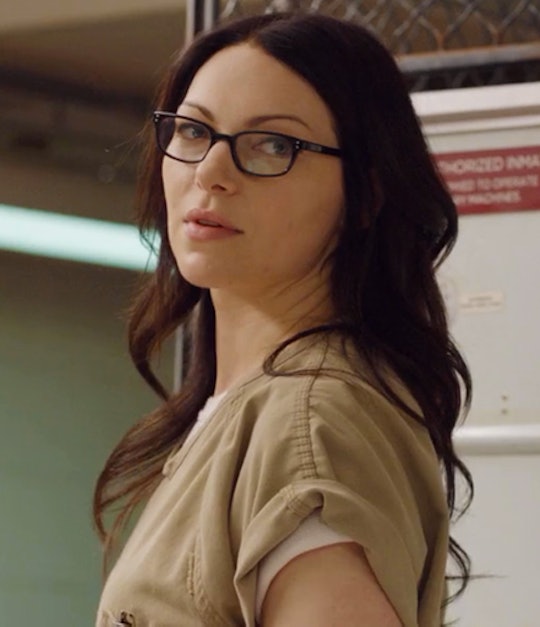 Who Attacked Alex On 'Orange Is The New Black'? Kubra Made A Big Move In The Greenhouse

(Warning: This post contains spoilers from Season 4 Episode 1.) Alex Vause's final moments in Season 3 of Orange Is the New Black had her cornered by one of the new guards and facing a certain death. We can all agree that we can't imagine the show without the Bettie Paige of Litchfield, but who attacked Alex in the greenhouse on Orange is the New Black? Who was the mysterious new guard who no one had really seen before? The prison had been hiring all kinds of new guards, being that the actual experienced ones had dipped out on Caputo (and rightfully so), and this guy was just another new poorly experienced guard at Litchfield.

Alex clearly recognized the guy as soon as he accosted her in the Season 3 finale of Orange Is the New Black. Let's take a step back in time with Alex Vause, though, and remember why anyone would be stalking her in the first place. The whole reason Alex and Piper are even in prison is because of their dealings with drug kingpin Kubra, and while Piper got thrown into Litchfield, Alex took a secret deal and publicly testified against the drug lord. Which, you know, if you're from the world at all, makes you an instant target. You don't mess with the leader of drug trafficking ring, because he ended up getting off anyway due to evidence that was misplaced. I.e., Alex hammered a few long nails into her own coffin with that misstep.

The person in question, though, who attacked Alex on Orange is the New Black, wasn't Lolly, the paranoid inmate who seemed to have been following her around and noting her every move. Instead, it was Aydin, one of Kubra's hitmen. We saw him once in a flashback with Alex, and had even witnessed Aydin killing one of Alex's friends in the past, so it wasn't too surprising. But what was surprising to see was Lolly coming to Alex's rescue in the Season 4 premiere of Orange Is the New Black.

The premiere of Season 4 of Orange Is the New Black jumped right in where Season 3 left off, giving us Lolly's view of Alex getting choked out on the floor of the greenhouse by Aydin, trying to do his job of offing her for the big boss. But, instead of being characteristically weird, Lolly actually came to Alex's rescue and helped her with the whole debacle.

In one of the darker scenes of Orange is the New Black as a whole, Alex went back to the greenhouse and, through tears of fear and frustration, finished the job on Aydin herself. It's hard to say what this will mean for Alex in Season 4, but for now, we can at least be happy that she's free from the clutches of Kubra and safe. For now.