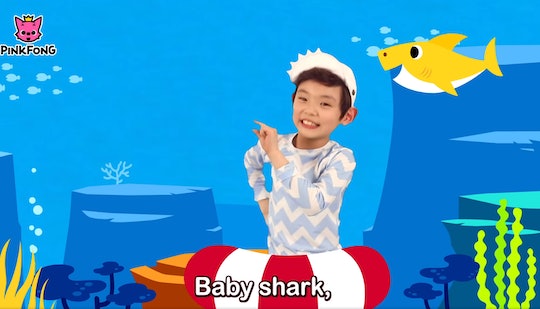 If You're Wondering Who's Responsible For The 'Baby Shark' Video, Look No Further

Across time there have always been certain songs and dances that embed themselves in the culture as touchstones. "The Twist," Madonna’s "Vogue," the "Macarena," "Gangnam Style," and now "Baby Shark." But who created the "Baby Shark" video that started the whole craze can't escape today? Who do we have to thank for the little ditty that has wormed its way into the brain of every parent with internet access?

A few years back, Baby Shark came to be when a Korean video company named Pinkfong designed it as part of its slate of educational videos, according to the New Zealand Herald. The video has actually been around for a minute; it was released in November 2015, the New Zealand Herald reported, but Pinkfong didn’t do any special promotion and it didn’t actually catch on until the summer of 2017 — first across Asia, then spreading throughout the world.

Pinkfong has thousands of videos on its YouTube channel, according to Quartz, but nothing has ever gone viral quite like Baby Shark. The original video now has over 2 billion views. Including spin-offs Pinkfong has made — like Christmas Shark and Ghost Baby Shark — the entire family of videos has amassed over 3.3 billion views, as Quartz reported.

Trying to track down Pinkfong’s origins will land you on the webpage for its parent company, SmartStudy, whose website states that “SmartStudy is a global entertainment company... Moving beyond the limits of traditional media platforms, we create original content and enable audiences everywhere to enjoy it through technology.”

But drilling down a little further takes you to Pinkfong’s page where its says it's “changing the way children learn and play with our content.” The name is a reflection of one of Pinkfong's characters, who is “an adorable prince from the planet Staria with boundless curiosity.” The site says it sells books and toys, in addition to creating videos, and even put on live shows.

If you’re curious about some of the other content Pinkfong creates, or are looking for Christmas gifts for little ones, you might want to check out its Amazon store.

On its website, Pinkfong also says it sells smart devices like a light cube — the Pinkfong Beam — which comes preloaded with 488 songs, 271 stories, and 43 shadow plays.

Needless to say, Pinkfong capitalizing on the recent success and so there are lots of Baby Shark options, including sounds dolls and sound books.

But the company hasn’t had anything to do with the viral #BabySharkChallenge that spread across social media earlier this year; no, that’s the kind of thing the internet takes care of all on its own. And Pinkfong couldn’t have foreseen that the little song apparently has a purpose even more useful than entertaining little ones.

A British talk show, for instance, used the song to have two of its hosts learn how to do CPR, according to The Sun. Volunteers from The Sandpiper Trust, a Scottish emergency services nonprofit, appeared on This Morning and said the song has “absolutely the right rhythm” to learn to perform CPR because it is the perfect 100 beats per minute.

So, while it might be driving you mad right now, don’t hate on the song too much the next time it’s drilling through your skull. Just hug your kid's Baby Shark plushy tight (if you could get one...) and think of all the good Pinkfong is trying to do.