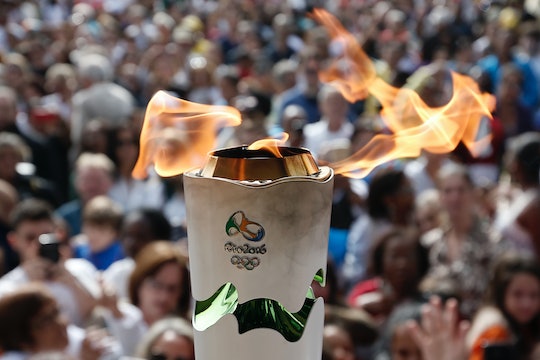 Who Decides Who Carries The Olympic Torch At The Opening Ceremony? It's A Huge Gig

As it turns out, carrying the torch is an incredible honor and one that is taken very seriously by torch bearers during the torch relay process. According to the official Olympic Games website, the Olympic torch is lit a few months before the start of the Olympic games in Olympia, Greece. The torch then makes its journey over land and sea, carried by different Olympic athletes, to the official site of the summer or winter Olympics. Once at that site, at the start of the Olympics — only one super special person will get the honor of carrying the Olympic torch and lighting the cauldron at the opening ceremony.

While the person who carries the Olympic torch during the Opening Ceremony is kept top secret until the last minute, it is Olympic Games Organizing Committee who decides who gets to carry that torch. Per the Olympics website:

The identity of the final torchbearer is kept secret until the last moment. It is often a personality from the sports world or a young person symbolising hope for the future.

The last Olympic torch bearer is chosen with the Olympics and the host city, like Rio, due in part to the person's special relationship with the host city. Typically, that person "sends out a strong message" with them. In 2012, at the London Summer Olympic Games, "British Olympic hero" Steve Redgrave carried the torch into the ceremony and seven young teenage athletes that were the last people to carry the torch and light the cauldron.

Those who are interested in being one of the many people to touch the torch during the torch relay can apply to do so. During the last summer Olympics in London, 8,000 people held the Olympic torch on its journey as it traveled 15,775 kilometers. Athletes, celebrities, and even normal people can hold the torch — but they have to be selected first. According to the Olympic's official website, aspiring torch bearers have to contact the Organizing Committee for the Olympic Games, who is responsible for organizing the torch relay. If selected, a person could carry the torch for the 2018 PyeongChang Winter Olympics or 2020 Tokyo Summer Olympic Games.

While the final torch carrier is shrouded in mystery, let it be known that whoever is selected to carry the Olympic torch at the Opening Ceremony has a special relationship to Rio and the past or future of the Olympic games. The position of holding the Olympic torch during the ceremony is an honorable one, full of symbolism and history.