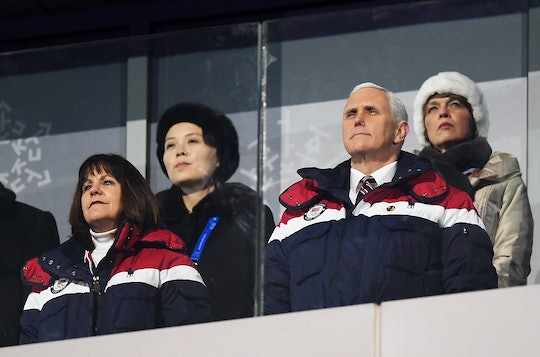 While the 2018 Winter Games in PyeongChang, South Korea are undoubtably a time for celebration, camaraderie, and friendly competition, they're also an opportunity to send a world-wide message. Which is why, arguably, who dignitaries bring to the Opening Ceremonies is just as important as the Olympians who walk through the tunnel during the Parade of Athletes. So, who did Mike Pence bring to the opening ceremony? The vice president of the United States decided to bring Otto Warmbier's dad, sending a clear message to not only North Korea, but the world.

According to USA Today, Otto Warmbrier was a 22-year-old student who decided to spend New Year's Eve in an authoritative country when he made a "mistake." The University of Virginia student was held in North Korea for over a year after being arrested at the Pyongyang airport, accused of trying to steal a propaganda poster, according to the NPR. Warmbrier was sentenced to 15 years of hard labor for his crimes. And after a single year of detention, he returned to the United States in a coma, dying shortly after from injuries sustained during capture. According to NPR, the official cause of death was "due to an unknown insult more than a year prior to death," but no one actually knows what happened to the young man when he was detained in North Korea.

Warmbrier's story, according to Fox News, touched President Donald Trump, who after watching Warmbrier's parents appear on Fox and Friends in 2017, tweeted: "Otto was tortured beyond belief by North Korea."

Due to the documented rising tensions between Trump and North Korea's Supreme Leader Kim Jong-Un, it's no accident (or surprise) that Vice President Mike Pence would ask Warmbrier's father, Fred Warmbier, to sit beside him during the Opening Ceremonies of the 2018 Winter Games. According to CNN, "The Warmbiers also attended the State of the Union as guests of President Donald Trump and first lady Melania Trump," so this isn't the first time the parents of Warmbrier has attended high-profile events as guests of high-level members of the current administration.

According to CNN, when Warmbrier arrived back in the United States he was in a persistent vegetative state. North Korea claimed the young man contracted botulism while in prison, and that is why he was in such a debilitating state. But, according to Warmbrier's parents, those in charge of Warmbrier while he was in custody "systemically tortured" him, and are to blame for his state upon arrival to the United States and, inevitably, his death.

While South Korean President Moon Jae-in has described the 2018 Winter games as “Peace Olympics," according to The Hill, tensions between the United States and North Korea seem to have overshadowed the spirit of unity often amplified by the Olympics. And while it's been a few weeks since Donald Trump and Kim Jong Un have personally attacked one another — either via Twitter insults and/or released statements — choosing to bring the parents of a young man who arguably died due to the treatment he endured while being held in North Korea is a stark reminder of the constant tension consistently felt between these two battling countries.

In the midst of the political messages possibly being sent during the 2018 Winter Games, perhaps there's one hard truth we're all forgetting: two parents, who lost their son, are in the audience, watching other sons and daughters compete. The weight on their shoulders, and the depth of their loss, cannot be overlooked or understated. Politics aside, these parents are mourning. And that loss cannot, and should not, be diminished.