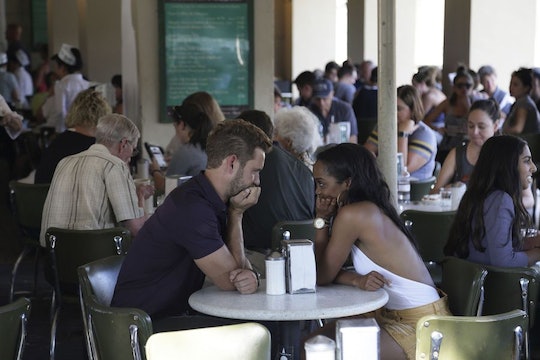 Rachel Opened Up To Nick On ‘The Bachelor’

Since the beginning of the season, the connection between Rachel and Nick on The Bachelor was easy to see. And on Monday's episode, during their day-long one-on-one date, things heated up between them even more. But when they talked about New Orleans, she mentioned having been there for a funeral, so who did Rachel lose on The Bachelor? She opened up to Nick in the most natural way, and then they continued to talk about their lives as their conversation flowed like they've known each other for years instead of weeks. Basically, they're meant to be together.

They spent the day exploring New Orleans and ended the night by having dinner in a warehouse full of Mardi Gras parade floats and decorations. It was then that Rachel mentioned that she loved the city and had been there for a funeral, but after Nick gave the requite "I'm sorry," they moved on to another topic. So who did Rachel lose? She also told Nick that her parents have been married for 36 years, presumably making them in their late 50's by now, so Rachel may have lost a grandparent or older relative. Of course it's entirely possible that she lost someone younger or closer to her, but the Dallas attorney didn't elaborate on her loss with Nick on The Bachelor.

The bigger takeaway, though, is that Nick and Rachel's one-on-one date on The Bachelor was about more than dancing in the street and making out multiple times, although both of those things do make for a good date on the show. The best part was that they were able to actually talk, while Rachel opened up to Nick and he opened up to her in return.

Although viewers didn't see Rachel elaborate on who she lost and whose funeral she attended in New Orleans, it's clear that she's made some legitimately good memories there with Nick. Taking a break from his date with Rachel, Nick told Entertainment Tonight, "Rachel has been kind of a front-runner since day one. Because I have so much confidence in her, she kind of had to wait a little bit." That's certainly true, since the contestant has been noticeably put on the sidelines since she got that first impression rose, but that's obviously because Nick was already so sure about her.

Thanks to their obvious chemistry, Rachel more than deserved this very important one-on-one with the Bachelor and the fact that she was able to open up about a loss shows how close they already are. And if she isn't high on your Bachelor fantasy bracket, you're probably going to be sorry.