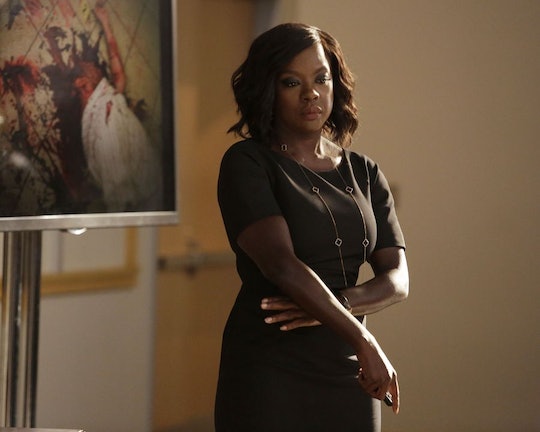 Who Dies On 'How To Get Away With Murder' Season 3? Annalise Is Clearly Devestated

It's hard to say if it could be any of the Keating five, as much of an impact as that would make with the show, especially after all they've been through, but it's also hard to believe that How to Get Away with Murder is ready to get rid of any of the main players just yet. It's only the third season - these poor law students haven't even graduated yet.

Lately, Annalise has grown closer with the students and vice versa. I.e., once upon a time Michaela probably wouldn't have given such a terse "I don't know" in one of her lectures before, but they've all covered up murders together. It sort of bonds you to one another.

So who dies on How to Get Away with Murder? Apparently, we're going to get clues each week as to who is still remaining at the end of the season, but as to be expected, we'll likely have to wait until the very end to find out who was important enough to Annalise to make her break down so hard.

Remember Eve from last season? We met her in present day and then saw her through flashbacks as Annalise's best friend and ex-girlfriend. She's also a lawyer and came to town to help with Nate's trial, which is kind of awkward, but it also worked. After, Annalise fell into Eve's arms again for a little while before they parted ways again, but it's been made pretty clear that there are still a lot of feelings between them. You could totally see Annalise freaking the freak out if it was Eve under that sheet.

Nate has been around since Season 1 and has been sleeping with Annalise since before both of their spouses died, so he's definitely not new. He's also around more than ever and their relationship is finally finding some solid ground. Which means that it's almost time for something awful to happen to tear them apart and put Annalise back in her place.

Lately, Bonnie hasn't served much purpose to be honest. The relationship she had with Asher is long dead, her only real friend, Frank, is long gone, and she's basically just furniture in the room now. That being said, her obvious lack of importance and her devotion to Annalise could send Annalise over the edge if she were to learn that the woman died.

We haven't seen Ophelia yet this season, but last season she played a larger role, being there for Annalise and trying to build their relationship while still being overbearing to the woman who needed that like a hole in the head. But Ophelia is also Annalise's last real family member who she seems to care about. It would definitely make sense if Annalise knew her mother was inside of the house when it caught on fire (also, who did that?), as she'd definitely shed a good amount of tears over that loss.

One Of The Keating Five

Again, who of the Keating five would make Annalise as upset as she was at the end of the season premiere episode? The death of Wes could definitely send her over the edge, but Wes has been an important figure in the show since day one, so the chances of him dying anytime soon are pretty slim.