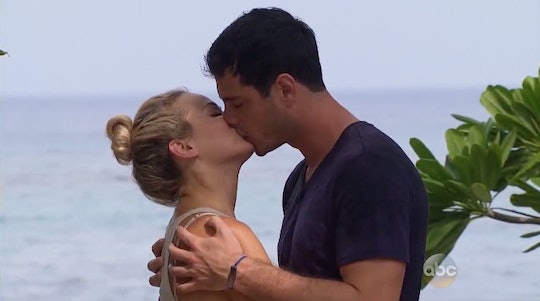 Who Does Ben Have Sex With In The Fantasy Suite? The Answer Might Contradict His Good-Guy Image

Bachelor Ben Higgins just got a good look at the three remaining contestant's roots during hometown week when the reality TV star met the girl's families. JoJo and Lauren B. remain odds-winning favorites to end up with Ben, while fan-favorite Calia has managed to keep herself a close third on the show as well (although there are rumors she might be going home next week... heartbreaking!). The field is dwindling on The Bachelor, and the time for Ben to make his choice is approaching. But I'm not talking about the rose, necessarily... you know, that other choice. Like, who is Ben going to have sex with in the fantasy suite?

So, everyone knows Ben takes his Christian faith seriously and really likes to play the "nice guy" card. That said, he's only human... and he's got plenty of crazy love hormones running rampant that could change that whole image in a heartbeat. Rumors are swirling that Ben will actually be hooking up with all three remaining contestants when the show heats up in Jamaica next week.

You see, the sneak peek at next week's Bachelor episode shows Ben having a really hard time narrowing the field down to two, even though the world thinks Calia is definitely going to be the one to go (but down worry, Calia fans, the gossip is the show's management wanted to keep her in the final three so she could go on to be the first ethnically diverse Bachelorette). Ben did show a bit of hesitation when he had a date with Amanda and her daughters at the beach on Tuesday and then had to say goodbye to the single mom. But its going to be even more gut-wrenching next week if Ben sends Calia packing because... well, this:

But Calia won't be the only one vying for Ben's attention next week. Don't forget favorites JoJo and Lauren B. Last week, Ben had a pretty awkward encounter with JoJo's two brothers, who accused him of "brainwashing" their sister and the other girls into falling in love with him. But the confrontation didn't seem to get to Ben. According to next week's sneak peak (if you haven't watched it ten times already), all three girls tell Ben they love him, and Ben admits he told two of the contestants he feels the same way... uh-oh.

That might not be surprising to some of the show's management. According to The Bachelor host Chris Harrison, Ben is "not gentleman enough" during the fantasty suite dates — a comment which is only serving to fuel the already heated drama.

With that knowledge (and a few snooping tidbits of gossip), heading into The Bachelor fantasy suite week in the tropics, fans will just have to make their own decision regarding whether Ben's nice-guy appeal is real or not.