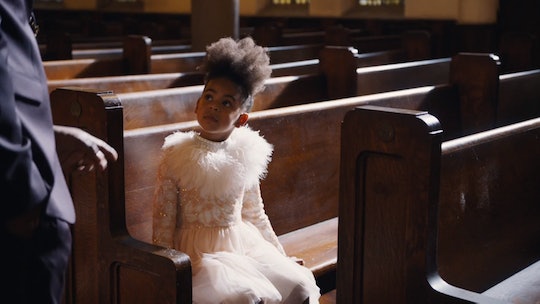 JAY-Z's music video for song "Family Feud" off of his album, 4:44, is less of a music video and more of a short film — and it is absolutely incredible. The video, directed by powerhouse director Ava Duvernay, features some of your favorite actors like Mindy Kaling, Jessica Chastain, and a newcomer on the scene — JAY-Z and Beyoncé's oldest daughter, Blue Ivy Carter. But who does Blue Ivy play in the "Family Feud" music video? She appears as a younger version of one important character in the music video and her role, while small, is so important.

The video begins with a very dramatic skit about family members betraying one another by stabbing each other in a post-apocalyptic setting, competing for a "throne." As the audience comes to realize, they are the ancestors of one of the presidents of this society, and his ancestors' violence goes against his new "legacy of peace." "The worst of us doesn't define us," the president says.

The videos flashes back to 2050 to a table of women leaders, with a woman in white feathers at the head of the table. The man states:

My beloved ancestor was one of the chief architects of the confessional papers and one of America's founding mothers. She and women from all walks of life revised the constitution over 444 years ago at a time, mind you, when making America great meant making America afraid of each other.

His ancestor tells the table of women in the flashback:

Ladies, this is just like the 13th amendment. Some people have civil liberties and certain people don't. America is a family and the whole family should be free. It's like my father used to say when I was a little girl: "Nobody wins when the family feuds."

The video then flashes back again to 2018, with JAY-Z, Beyoncé, and Blue Ivy playing different characters. Blue Ivy, wearing a collar of feathers similar to the other character, sits down in a pew and watches her father repeat his titular phrase that she tells the table of women (which just so happens to be the main lyrics of the song) — "nobody wins when the family feuds." You can easily draw the conclusion that Blue Ivy is supposed to play a younger version of the woman in the white feathers.

People can not get enough of her super adorable appearance in the video and the character that she plays. If JAY-Z can envision a women-led America (led by Blue Ivy herself), then why shouldn't it happen?

With a song so heavily about family, it is only right that JAY-Z included his daughter in the music video. In every single second that she appears in the video, Blue Ivy works it, looking absolutely adorable at every angle. But this is not the first time that Blue Ivy has appeared in a music video. Like her father's grand video for "Family Feud," Blue Ivy appeared in some videos for her mom's visual album, Lemonade, which debuted on HBO in 2016. Talk about star power.

And this isn't the first time that Blue Ivy has appeared in something related to 4:44. While it might be her first visual appearance on the album, and while she might not have a speaking role in "Family Feud," she has already had her voice heard on 4:44. Blue Ivy has a feature on "Blue's Freestyle/We Family," from the album, which debuted in July, making it her second rap song debut. Shortly after she was born, JAY-Z released a song titled "Glory," featuring Blue Ivy's coos at the end of it. At just a few days old, Blue Ivy was already making hit songs.

Now, she can add actress onto her resume, after she expertly played the role of "Future Founding Mother Of The United States" in the music video for "Family Feud."