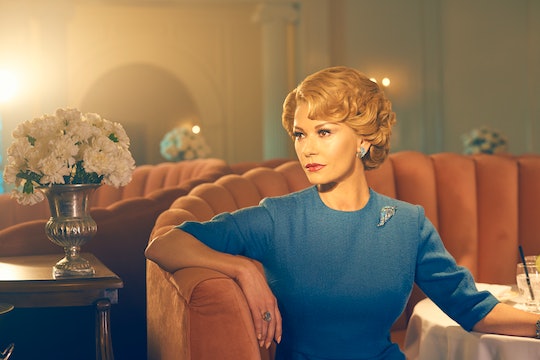 Catherine Zeta-Jones Is Ready For A 'Feud'

As FX gears up to premiere yet another Ryan Murphy masterpiece, this time in the form of Feud — a look at the rivalry between Bette Davis and Joan Crawford — it looks like there's going to be yet another spattering of stars. The trailer for the series starts off with Catherine Zeta-Jones' character talking about the rivalry between the two Hollywood icons, while acting as a sort of interviewee on the subject. But who does Catherine Zeta-Jones play on Feud? She's actually portraying a real-life person named Olivia de Havilland.

Havilland (now 100 years old) is an Academy Award-winning actress who was in several big movies at the height of her career. So it totally makes sense for Zeta-Jones to channel yet another big actress in Feud to help tell the story of the super dramatic and all around juicy interactions between Davis and Crawford. The latter two actresses had names which are now synonymous with the film industry in the '40s, '50s, and even '60s, but what about the character Zeta-Jones is bringing to life on Feud?

Havilland just turned 100 in July of 2016 and these days, spends most of her time at home in Paris, but until she decided to leave the movie business in 1988, she had a lively career. In an interview with Entertainment Weekly in 2015, Havilland spoke with apparent happiness about her time on one of the most famous movies of all time, Gone With the Wind and said that she's seen it "about 30 times." (You and me both!)

She spoke in the interview about staying in a hotel while her home was being renovated, but she certainly knew how to make the best out of the situation. "How many women in this world are served breakfast in bed every morning by a gorgeous young man?," she asked, referring to room service at the hotel. Can she be my new best friend please?

Now Zeta-Jones is set to portray her in the earlier years of her career on Feud. Hopefully her character will be able to provide viewers with a little bit of background history as to what made these two actresses loathe each other in the first place.