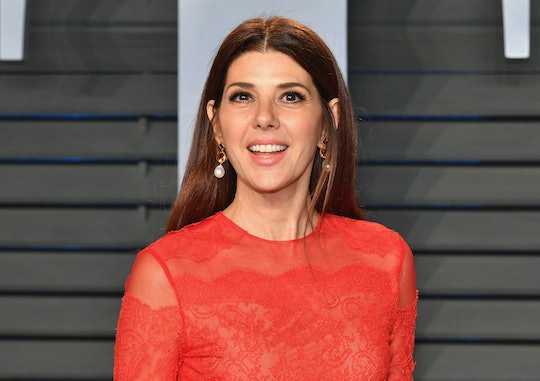 Praise be, fans of The Handmaid’s Tale, because along with Season 2 will come a new handful of guest stars, including Oscar winner Marisa Tomei. Fans probably know her from one of the many TV shows or movies she’s been in over the past few decades, but who does Marisa Tomei play on The Handmaid’s Tale? According to Entertainment Tonight, the actress will appear in the second episode of the new season in a one-off guest starring role, but a lot of the details of her specific character have been kept under wraps. Executive producer and showrunner Bruce Miller said at the Television Critics Association press tour in January that he was excited to be have been able to get the actress to play a role on the Hulu series, even if it is just for one episode.

Even so, it makes you wonder who Tomei is going to play on The Handmaid’s Tale and what her significance will be to the plot as a whole. Since she’s only guest starring and not set to be a regular part of the cast, viewers probably shouldn't get too attached to her when she makes her appearance, but nothing that happens on the show is for nothing. Regardless of how many scenes she’s in, Tomei’s character is probably going to be important, regardless of the fact that she’s only on the show for a short time.

Although there aren't many details out there about Tomei’s character, the title of the episode she will appear in is "Unwomen." While this particular class of Gilead women hasn't yet been explored in the show, it was touched on in the original novel. By now we know about the Marthas, who are like domestic servants, the Aunts who are there to guide the Handmaids, and then of course the Wives, who get to be married and wear either blue or blue and green to signify their social standing. But there are also the Unwomen, who are degraded as you might expect.

In The Handmaid’s Tale book, the Unwomen are the women who are sent to live and work in the Colonies, cleaning up radioactive waste for the rest of their lives. They’re women who were feminists before the government was overthrown by the movement which resulted in Gilead. It's also where women go who don't abide by the Gilead rules and misbehave badly enough.

If Tomei is going to appear in the "Unwomen" episode of The Handmaid’s Tale, then she’s probably one of the women currently residing in the Colonies. In the trailers for The Handmaid's Tale Season 2, it does look like the Colonies will finally be visited, so it would definitely make sense to see her there. The only question is, why was she sent there in the first place and how much longer does she have left until the toxic environment kills her? The episode should provide us with answers.

Since Tomei will appear in just one episode, she could be used as a way to show the true horrors of the Colonies through a brutal death as a result of working in the middle of pollution and danger. This would give viewers a deeper look into this new group of women that the show hasn’t yet explored without getting rid of one of the more main characters. Either way, Tomei is kind of a big deal and I can't wait to see what her new character adds to this already compelling storyline.