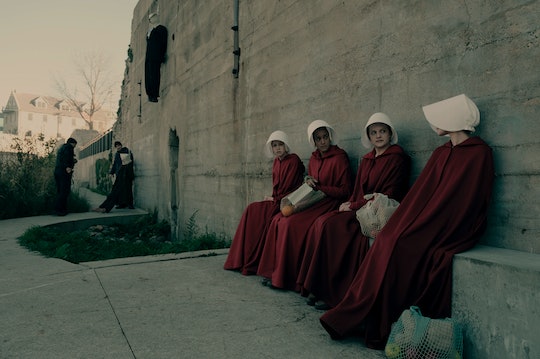 In Some Ways, 'The Handmaid's Tale' Is Already A Reality

In the pilot episode of the TV adaptation of Margaret Atwood's The Handmaid's Tale, Serena Joy (Yvonne Strahovski) and Offred (Elisabeth Moss) have a strained relationship, to say the least. (Warning: the following contains spoilers.) Although both Serena Joy and Offred are women in Gilead, their social statuses couldn't be more different: Offred is a handmaid to Serena Joy, which means she is intended solely as a vessel for reproduction, in an era where most women, including Serena Joy, are infertile. Serena Joy, on the other hand, is the wife of the Commander, one of the most important dudes around. It's her job to not only watch as Offred and her husband have sex, but to remain silent and passive about it.

Serena Joy might have the house, the clothes, and the prestige that come with being a woman married to a high-ranking man in this totalitarian regime. But the simple truth is that she cannot give her husband a baby. There are plenty of reasons why these two women hate each other, but for Serena Joy, it comes down to the difference between their two wombs: Offred can reproduce, while Serena Joy can't. Indeed, a recurring theme throughout the series is the tension between mothers (or mothers-to-be) and childfree women — not only between wives and handmaids, but also between handmaids and Marthas, or household servants who are also unable to reproduce.

While The Handmaid's Tale takes place in a dystopian vision of America, there's nothing all that far-fetched about how the show depicts enmity between mothers and child-free women. To an extent, this dichotomy already exists in our culture. After all, when women are largely conditioned to believe that the most important thing they have to offer is their bodies — and how those bodies might serve the men around them — there's a clear line in the sand drawn between childbearing women and non-childbearing women, which can breed judgment, if not outright distrust, between both parties.

Of course, this sense of rivalry isn't just limited to women who have kids and women who don't. Thanks to the influence of the patriarchy, women are inculcated to be competitive with each other in most aspects of their lives.

In our culture, there's tremendous pressure on women to have children in the first place. This pressure is evident in friends or family members telling 30-year-old women to hurry up and conceive, "before it's too late," or in single, child-free women being painted as lonely, loveless spinsters, or in people wondering why any woman could ever possibly choose not to have a baby.

Women beyond a certain age who choose not to reproduce tend to be viewed as social pariahs. While this is rapidly changing in some circles, with an increasing number of women opting out of marriage and motherhood, it's still not uncommon to come across op-eds stating, matter-of-factly, how women who are childless by choice "are a big part of society's deterioration." And it's not uncommon for mothers to be a source of that judgment.

This is, perhaps, the cleverest trick in patriarchy's playbook: by turning women against each other, we don't bother to question why it is that we still don't have the same opportunities as men, or why men still largely get to decide what we can and cannot do with our bodies.

"I [speculated] on her “situation”, wondering if she couldn’t have children or didn’t want to," mom Eleanor Tucker wrote of her childfree friend for the Guardian in 2014. "And if she didn’t want to – why not? Was she career obsessed? Did she not like them? Was she a secret drinker?"

It's not totally surprising that women who have children are sometimes at odds with women who do not. Our culture encourages women to be competitive with each other, particularly when it comes to things like body image or romantic relationships. This is, perhaps, the cleverest trick in patriarchy's playbook: by turning women against each other, we don't bother to question why it is that we still don't have the same opportunities as men, or why men still largely get to decide what we can and cannot do with our bodies.

Citing the governing forces around them in Gilead, Ofglen (Alexis Bledel) perhaps puts it best: "They do that really well: make us distrust each other," she says. While Ofglen is referring to the Republic of Gilead's rule that handmaids walk in pairs so they can spy on each other, this sense of mutual distrust is evident in our society on multiple levels. Whether it's moms judging women who cannot or choose not to reproduce, high school girls slut-shaming each other, or women negatively comparing their own bodies to those they see on Instagram, women are taught to be suspicious of each other. That is how the patriarchy keeps us under control.

In the United States, men still largely have control of our bodies on a governmental level. Women's rights, and specifically women's reproductive rights, were a central focus of the 2016 presidential election in the United States overall. That they were a focus ultimately means these rights are still up for grabs. They can be taken and they can be given. And following the election of Donald Trump, groups of men in positions of authority still sit around debating women's reproductive rights, taking away bits and pieces of our autonomy along the way.

In such times, it's critical for women to support other women. This is not an option for the women in Gilead, who face captivity or death should they show the slightest sign of resistance. When it is an option, however — when camaraderie and solidarity are possible and necessary — there's no viable reason not to challenge problematic institutions. There's no reason for women to play into the antiquated notion that tells us childlessness is synonymous with moral depravity; or, on the opposite end of the spectrum, that the ability to have children is a sign of a more fulfilled life.

We should be fighting for choice. We should be fighting for autonomy and equality. But we cannot do so if we are fighting each other. As long as we continue to allow patriarchal hierarchies and outdated ideals of what it means to be a woman define us, however, we risk living in a world that is not totally unlike Gilead. The critical difference is that, at least for now, we can choose to stand by each other.