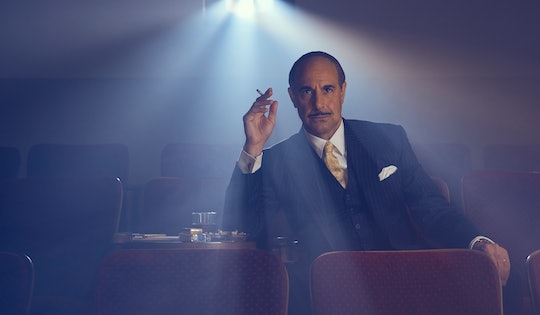 This 'Feud' Character Is A Master Manipulator

In Ryan Murphy's latest show for FX, he's giving the Hollywood treatment to a Hollywood rivalry that was very much real in its time. Feud, starring Jessica Lange and Susan Sarandon, will follow the rivalry between Joan Crawford and Bette Davis that took place in the early '60s, but there are plenty of other stars set to portray some of the bigger players as well. So who does Stanley Tucci play on Feud?

Jack Warner is part of the famous Warner Brothers that people still know today because of the film company's longevity in the business. But on the new anthology series, Tucci's Jack Warner is a bit of an antagonist for the on-set rivalry between Davis and Crawford. According to the Turner Classic Movies website, the attention that the film What Ever Happened to Baby Jane? received well before it was even released was because of the on-set feud between Crawford and Davis.

And, according to the series, which premieres in March 5 on FX, Warner helped to fuel the rumors by putting them in situations to try and orchestrate even more drama between the two stars. They were even given adjoining dressing rooms on the Warner Brothers studio lot, forcing them together in close quarters. Although Feud is quick to place a lot of the blame on Warner as one of the driving forces behind the drama between Crawford and Davis, they were rivals even before they worked on the movie together.

In Feud, Warner is shown as the powerful Hollywood player who does have the power to manipulate situations to drive more drama and publicity to the set because of the rivalry that already existed between the stars, but how accurate is that? Before the film was even cast, Davis reportedly said in a TV interview that Warner had at first refused "to put up one nickel for us two old broads," but it's unclear if those were Davis' or Warner's actual words. Still, it seems that Warner's views on having the two women in the movie were likely changed when he realized the amount of publicity (and money) it would gain from having the feuding actresses on the same set, fighting for the best shot on-screen.

What Ever Happened to Baby Jane? is still regarded today as one of the greatest cult classics of its time, proving that the feud between Davis and Crawford played very well on-screen (probably because the loathing viewers saw was so real). But it's entirely possible that Warner may have used his clout in the business and status as a powerful man to keep them at each other's throats even more so than usual during the filming process. It'll be interesting to see Tucci play that out in the series.