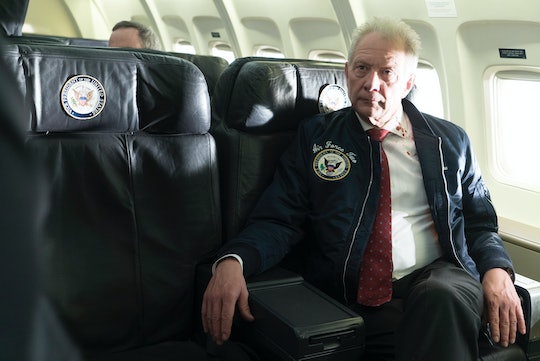 Cyrus Finds Himself In Serious Danger On 'Scandal'

Just when things were finally settling down in Scandal's fictional Washington, D.C., there had to be some new drama involving one of the main characters when someone took control of Air Force Two remotely. But who hacked the plane on Scandal? Cyrus could very well have been in serious danger and overall, there were a number of suspects as to who might have taken electronic control of the plane while in the air.

What was known was that whatever malware tapped into the plane's controls came from someone's electronic device that was already on the plane. Hannah, Cyrus' secretary, confided in him that it may have been her fault, as she hadn't kept a close eye on the electronic devices in Cyrus' office, including her laptop, prior to boarding the plane, so the culprit almost had to be someone close to him or to the White House.

The most obvious suspect was Jake, because he'd been gunning for the kind of power Cyrus has as vice president and, frankly, he doesn't much care for him anyway. Getting Cyrus out of the way would give Jake a shot at sliding into place as the new vice president, which would give him more power than ever. Plus, he's the one who ensured that Cyrus would be on the plane that day, but because Jake was the most likely suspect of the plane hack on Scandal, you know it wasn't going to be that easy.

Then again, Scandal did choose this episode to reintroduce Olivia's mom, Maya, once again, and she's been known to be a little unpredictable. Olivia went to visit her on what she thought was her birthday, but Maya made it crystal clear that she'd rather be given the gift of being able to leave her apartment and really, the country. Perhaps she'd been working on something secretly, as only she can do while in what is essentially captivity, in order to gain her freedom once again.

We also probably shouldn't be sleeping on Rowan ever, even if he showed some humanity in keeping Quinn and her baby alive. He still wants power above all else, let's not forget that. And just because he's no longer Command, it doesn't mean that he doesn't still have resources to try and get some power and control back. Since the plane seemed to be heading for D.C. to be used as a weapon, it had to have been controlled by someone who has nothing left to lose but plenty to gain by such a drastic move.

As far as Cyrus was concerned, though, Jake was the one behind the plane being hacked, and it was hard to doubt that, especially as he was the one who suggested early on that they shoot down the plane in order to stop it.

Then again, Maya had been the only one to literally celebrate the hacking of the plane, which made her look plenty suspicious. She essentially told Olivia to forget about those on the plane, as they'd forgotten about her and had thrown her out of the White House. Could that be because Maya was somehow the one behind it all?

The first half of Scandal's final season was all about Olivia's rise to power and her subsequent downfall, so with several more episodes to go before the season and show is over for good, there has to be something big to carry it the rest of the way. Using one of the main characters as the person behind the plane hack on Thursday's episode would definitely make sense, especially since there was more than one suspect throughout the episode.

In the end, though, it was Cyrus himself who was the one to blame for the cyber hijacking of Air Force Two, which means that he could be the next big power player for the white hats to grapple with for the remainder of the season.