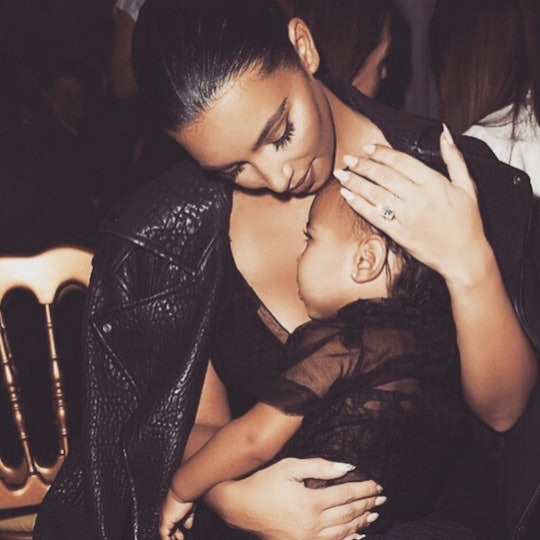 Who Had The Cuter First Baby Photo — North or Saint West?

The day has finally arrived: Kim Kardashian has posted the first photo of North West. Twitter is blowing up over the precious pic of tiny Saint's hand curled around his big sister North's finger. And that caption: "She said, 'He's my best friend.'" Oh man, the Kimye kiddos are already besties. I can't handle it. Unlike little Nori — for whom we waited a whole two months until we got to see her very first picture online — we've only had to wait a whopping 28 days since Saint arrived on Dec. 5. But, like the social media maven she is, Kardashian knows not to reveal too much, too soon — so all we're getting right now is just this teaser photo, it seems. Who knows when we'll get to see Saint's adorable little baby face.

Until then, let's see how the Kimye kids' first baby photos compare: Who's got the cuter first baby pic? The very first photo of North West was actually revealed on her grandmother's talk show when daddy Kanye West revealed North's first baby photo on Kris. It is a stunner of a photo, showing North West when she was just a teeny tiny two months old at the time, in a classic pose as she looks just past the camera, hand reaching out:

Gah! So cute. Now, here's Saint's first baby photo, when he's not yet even a full month old:

Oh man. The cuteness. This is a tough call. On the one hand, North's first photo went all in, showing the world her face. But in this first photo of Saint, there's something tremendously sweet and cute about it in a far more abstract sense. This photo, without showing us either of Kimye's kid's faces, manages to convey so much: Family, love, big sis-little bro, connections, friendship. It's actually pretty touching. As much as North and her new little brother Saint may be growing up in the international spotlight, their brother-sister bond is something that will always be uniquely special and precious between them.