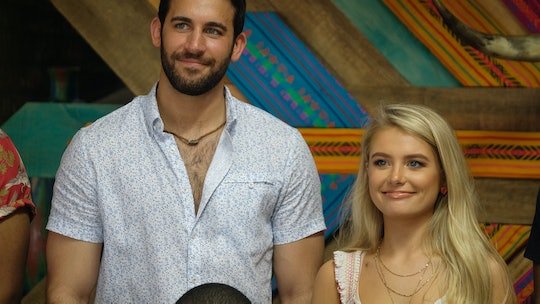 Can We Please Talk About Who Has Six Toes On 'Bachelor In Paradise'?

A new controversy has washed up on the shores of Bachelor in Paradise, and honestly, I can stop thinking about it. At the end of the Aug. 12 episode, fans of the ABC reality series were left with a major cliffhanger involving... an extra appendage. Yes, someone is walking around the Paradise beach with six toes, and viewers have been obsessing about the fresh mystery ever since. So who has six toes on Bachelor in Paradise? Luckily, Detective Demi Burnett is on the case.

Following a dramatic trailer for the Aug. 13 episode, BiP aired a hilarious clip of Demi and Caelynn Miller-Keyes walking along the beach in Mexico. All is well until Demi spots something shocking. The camera pans in for the proof, and there it is — the footprint of the "six-toed bandit," as Dylan Barbour calls it.

"Who is the monster wandering around this beach with an extra pinky toe?" Demi ponders in a confessional. The reality star then sets out on a quest to find the owner of the now-infamous footprint.

"I have to walk around and count everybody's toes on their feet," Demi says. "For my own sanity and for the respect of all of my fellow Bachelor in Paradise people."

In the clip, Demi whips out a measuring tape and notes the footprint is 10-inches long. She then concludes the foot belongs to a man and begins her interrogations. First up is John Paul Jones. He has five toes, confirmed. Demi also checks Wells Adams, who is all smiles and seems to be in the clear.

Although the clip doesn't confirm or deny other contestants, there seems to be a heavy finger pointed at Blake Horstmann, who has recently been under fire over his relationships with Kristina Schulman, Hannah Godwin, and Caelynn.

"It's probably Blake because it's always Blake," Demi says in a confessional. "How many lies, Blake? You've been banging everybody at Stagecoach, and now you've got six toes. I don't trust you." Hilarious.

For the time being, the mystery remains unsolved, and it's unclear if the controversy will even continue into the next episode. Seriously, the culprit could be anyone. But this hasn't stopped fans from getting involved with the investigation online.

Regardless, if Demi really thinks Blake has six toes, a fan revealed the one thing she needs to do.

"If Demi thinks Blake has 11 toes, she just have to ask Kristina, or Caelynn," the fan wrote. Yikes.

Jokes aside, the hilarious clip was all the proof Bachelor Nation needed to show Demi is a gift that just keeps on giving.

To clarify, there's nothing "monstrous" about having six toes on one foot. It happens, and if the case is solved by the end of the sixth season, the person in question shouldn't be shamed for having an extra appendage. It's simply B-side mysteries like these that truly bring Bachelor Nation together, and I'm just here for the ride.