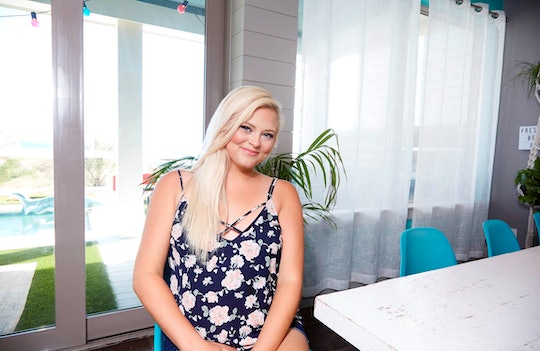 Ever since Jersey Shore ended in 2012, MTV and other cable networks have tried to recreate the magic that was behind the original with similar shows. Finally, it looks like MTV Floribama Shore might be the ticket to getting a new kind of Jersey Shore and new reality stars. And I don’t know if she’s going to be the southern Snooki or JWoww yet (or something of her very own), but who is Aimee Hall from MTV Floribama Shore? Apparently, the Alabama native describes herself as a Princess Goddess Mermaid, but the exact definition of that isn’t quite clear just yet. What is clear, though, is she’s wanted to be a part of something like this for a while.

According to her bio on MTV.com, Hall isn’t afraid to speak her mind, even if it often comes out with tons of bleeped out expletives. OK, you have my attention, because she already sounds like someone I’m going to love watching, even if I don’t end up loving her. She’s also fresh out of an on again/off again relationship with a guy she'd been dating for 10 consecutive years, but recently put an end to things after he impregnated another woman. Needless to say, Hall is likely coming into MTV Floribama Shore ready to meet some new guys and have fun.

Although it’s far too soon to tell if MTV Floribama Shore will meet the same success as Jersey Shore did before it, Hall was probably a smart addition to the cast, as she seems unafraid to be herself and, judging by her Instagram, definitely knows how to party. And while going out and partying with the roommates isn’t all the show will be about, you know that’s where plenty of the hookups and drama will come from, so it’s basically a must.

But before Hall was cast on MTV Floribama Shore, though, apparently she tried out for Party Down South, which ended its five-season run in 2016. "I just got out of a really bad relationship, for 10 years, and to be honest, I just needed a break from home," Hall told AL.com. "I had applied for Party Down South a year ago, and I didn't get that. But I had just prayed, 'God, send me on the road. I'm ready.'"

Though she obviously didn't make the cut to be added to the ranks of Party Down South, there is one member of that show’s cast who she seems to be close with in real life. Ryan "Daddy" Richards posted a photo on his Facebook page of both him and Hall back in May with the caption: "Had my little friend down this weekend for some last minute advice before she goes and films her first season!!!!!! Go follow my friend Aimee Hall she is about to get it going!!!"

On her Instagram, Hall also has several selfies with the Party Down South alum, so I’m not sure how the two became close, but maybe this opens the door for Richards to make a cameo on MTV Floribama Shore’s first season?

The 25-year-old small town southerner currently works as a bartender at The Scrap Yard in Bay Minette, Alabama, so packing up to film Season 1 of MTV Floribama Shore this past summer was easy enough. But the biggest thing to remember about Hall, according to her interview with AL.com, is the fact that what you see is what you get. Although she may have been trying to experience reality TV for a couple of years now, she’s still the same small town girl. "I am not an actress. I'm just me," she said "I have the biggest personality, I know. I'm super-goofy. I'm serious, too. I'm a hot mess."

Although other shows have tried to copy the format (Party Down South, for example), MTV Floribama Shore is actually the first Shore series to premiere in the United States since the original. The other Shore series now include Gandia Shore in Spain, Geordie Shore in the UK, Warsaw Shore in Poland and Acapulco Shore in Mexico, so it’s about time the U.S. introduced a whole new set of 20-something partiers. If Hall and her fellow reality stars can take the new series and create something that fans respond to like they responded to Jersey Shore, then viewers can no doubt look forward to several more seasons of this new MTV series.