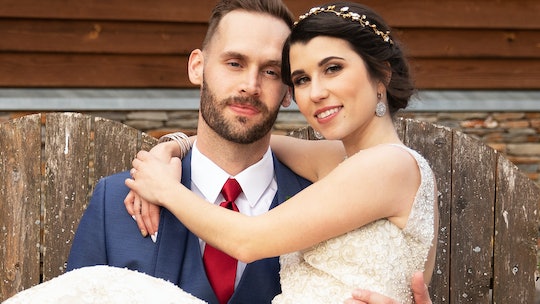 Guys, Amber From 'Married At First Sight' Is Like A Breath Of Fresh Air

On Wednesday, Jun. 12, Married at First Sight returns to Lifetime with a lineup of fresh faces. The eight singles from Charlotte, North Carolina hope for nothing more than to find their happily ever after. The Married at First Sight Season 9 cast includes Gregory Okotie and Deonna McNeill; Keith Manley and Iris Caldwell; Jamie Thompson and Elizabeth Bice; and Matthew Gwynne and Amber Bowles. As it happens with every season, fans are itching for more information about the cast members. So who is Amber on Married at First Sight? The reality star's backstory is so relatable, it's almost unreal.

For the most part, it looks like Amber is super down to earth and likes to keep a low profile. After several failed attempts to locate her social media accounts, the Married at First Sight Instagram shared a brief look into how Amber lives her life.

After explaining that she doesn't know how to meet guys, she stated, "I don't wear makeup, I don't wear glitzy, glamorous stuff." The new reality star then explained that she was ready to settle down. "I am in a good place in my life where I really want to share my life and spend my life with someone," Amber said. "I am so ready to just start my forever."

According to her official bio on Lifetime's website, Amber is a 27-year-old middle school teacher who loves to travel and read. The Lifetime star is also described as bubbly, energetic, and strong on family values. "She hopes to find a husband who is just as family-oriented as she is," Amber's bio states.

When the Married at First Sight cast was revealed, People reported that Amber's mom came out when the reality star was 4 years old and "moved to Massachusetts to find acceptance." That said, she is incredibly close with her identical twin sister and father. When speaking to the publication, Amber shared that she's ready to settle down. “I don’t want to date anymore!” she said.

Nonetheless, finding a lifelong soulmate could prove to have its ups and downs. In a teaser trailer for MAFS Season 9, courtesy of Us Weekly, Amber acknowledged her fear.

“I’m gonna be changing my whole life for a stranger and that scares me,” the Lifetime star said.

Regardless, it's still possible for Amber to find her match on MAFS. So who is the man in question? According to E! News, Matthew is a 31-year-old international basketball player. But because of his busy schedule, he's gone several months out of the year, which has affected previous relationships. Thus, Matthew is looking for someone who is willing to adapt to his schedule and he's hopeful that the show will help him find that person.

Even so, Matthew doesn't seem to be as close to his family as Amber is to hers. Per his Lifetime profile, Matthew has a "strained relationship with his recently divorced parents."

Although this doesn't necessarily spell out danger, Matthew and Amber's difference in family values could cause some drama down the line. But for now, fans will just have to hold on tight and wait for the storylines to unfold after the couples say "I do."