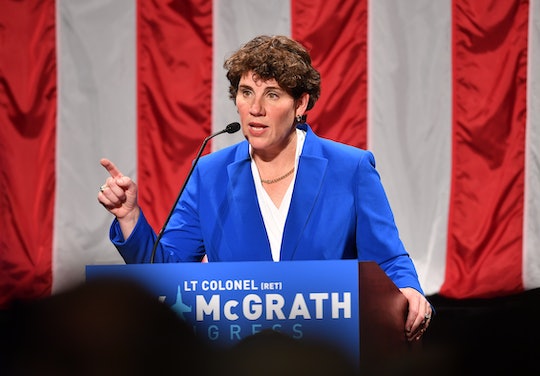 Everything You Need To Know About Amy McGrath, Mitch McConnell's Opponent In 2020

Kentucky Sen. Mitch McConnell has worked in politics for decades, a career that earned him the title of Senate Majority Leader in 2015. And while some American citizens approve of how he has handled the job, others are eager to see him removed from the role, like Retired Lt. Col. Amy McGrath, a former fighter pilot who just announced her 2020 bid for the Kentucky Senate. Although you might not have heard of McGrath's name before, there's a good chance that will soon change thanks to her impressive background.

McGrath, a 44-year-old Kentucky native and mother of three, has a lengthy resumé filled with accomplishments. McGrath made history as the first woman in the United States to fly an F-18 fighter jet in combat, flying a total of 85 missions throughout Afghanistan and Iraq during her 20-year career, according to the Military Times. It's possible McGrath inherited her pioneering streak from her mom, Marianne McGrath, who was one of the first women to have graduated from the University of Kentucky, according to her campaign website.

In addition to McGrath's work in the Marine Corps, she also ran for a seat in Congress during the 2018 midterm elections and was narrowly beat by Kentucky Rep. Andy Barr, a Republican, by just three points, according to The New York Times. But instead of giving up on politics altogether, she plans to run against McConnell for a seat in the Kentucky Senate, a bid she announced Tuesday. As McGrath noted in her announcement video, she believes the Senate Majority Leader, 77, plays a big role in the nation's problems.

In the three-minute video McGrath released to Twitter, she made it clear that she views McConnell as the arbiter of serious issues of political corruption in Washington, D.C., or as she refers to it, "the swamp."

McGrath's video has already been viewed 2.4 million times as of Tuesday, which could be a good sign for her chances in 2020 against the McConnell.

This isn't the first time McGrath has spoken out against McConnell. During her 2018 bid for Kentucky's 6th District in Congress, McGrath spoke out about her efforts to be a fighter pilot and how difficult it was to get any kind of support from politicians, McConnell included. When McGrath was 13 years old, she wrote a letter to McConnell asking him to change the law that prevented women from becoming fighter pilots at the time, an anecdote she detailed in her video. "He never wrote back. I've often wondered, how many other people did Mitch McConnell never take the time to write back, or even think about?" she said.

I think it's safe to say that McGrath has a heck of fight on her hands as the 2020 election gets underway. McConnell has been in the Senate for three decades, and President Trump won Kentucky in 2016 by a whopping 30 points, as per CNN. That being said, it's worth noting that Amy McGrath is not one to back down from a fight. And this fight against Mitch McConnell is clearly one she's been preparing to win for years.