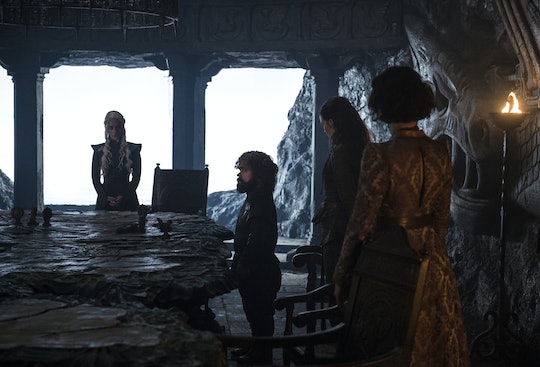 Who Is At Casterly Rock On ‘Game Of Thrones’?

Out of all the homes and castles that have graced the screen on Game of Thrones, the one place viewers haven't been able to see is the reportedly huge and impressive Casterly Rock, the native home of the Lannisters. But now that the Unsullied are about to be taking it over, who is at Casterly Rock on Game of Thrones right now?

The last time anyone even really talked about the home of the remaining three Lannisters was Season 3, when Tyrion mused about eventually going back home to be Lord of Casterly Rock. Of course, he eventually murdered his dad on the toilet and since then, Jaime or Cersei going home hasn't really been an option.

The individual or individuals who are currently at Casterly Rock are likely a team of advisers, much like Ned had at Winterfell and the same kind who aid little Robin Arryn at the Eyrie. So when the Unsullied march in to take over the tall impressive castle, it's probably going to be like taking candy from a baby. In other words, Daenerys' plan to first take over Casterly Rock is going to be the perfect shot at Cersei, since the land is likely not properly protected right now.

As we've seen on Game of Thrones, when you have a Lord or Lady of a certain house, you also have a table of advisers under them to help them rule their countries. And even though Tywin Lannister seemed kind of like the "I'll do it myself because you'll screw it up" sort of guy, he likely had a group of advisers below him who he left in charge when he went to King's Landing to save his family during the Battle of the Blackwater back in Season 2.

Now, with Cersei focusing most of her attention on defending King's Landing and that precious throne and Jaime doing pretty much whatever she wants, Casterly Rock has likely been the furthest thing from her thoughts. Meaning that with what little of the Lannister army remains and the small amounts of allies they have left, Daenerys and the Unsullied will be able to conquer Casterly Rock before Cersei even realizes what's going on.

Since Tyrion totally supported the idea of invading Casterly Rock and he would know about its defenses more than anyone, we have to assume that they have a chance. Even after Euron's invasion of the ships in order to kill a Sand Snake or two and take Ellaria and Yara to Cersei, Daenerys' army is pretty legit.