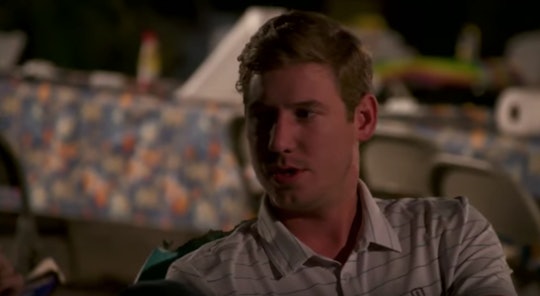 Austen's Love Life May Get Complicated On 'Southern Charm'

Austen Kroll is having a rough time this season of Southern Charm. Last year, he had a great job selling beer and was hitting it off with Chelsea. Now, he's unemployed and seems to be taking his day drinking a little seriously. Which isn't a bad thing by any means. It's just a huge change. So who is Austen Kroll from Southern Charm dating this season? Because he's still a catch, unemployed or not.

Alas, so far Austen seems to be single. During the premiere, he told Shep that his fling with Chelsea had fallen apart, thanks to him sleeping with one of her friends and then trying to come over to Chelsea's after hitting the town. Austen did mention that the door was "open" with Chelsea still and the two do seem to at least get along. So maybe there's romance in their future this season.

Whether or not Chelsea is into that is a whole different story. She really put it out there last season and Austen just didn't seem to be able to stick the landing. There's even a clip from later in the season with Chelsea telling Austen that she's OK with him dating her friend, even though she looks like she's on the verge of tears. She definitely deserves someone who cares about her seriously, so it looks like Austen might have to look elsewhere for love this year, which is what seems to be happening.

It's unclear from social media whether this is the "friend" of Chelsea's in question, but there are pictures of Austen with a woman named Madison on his Instagram page. One photo shows them having mimosas with the caption, "hunch this won't be the last brunch."

Over on her page, there are pictures of the two of them at various events together, one of them posted just a few days ago. So it looks like he's off the market for the time being. Then again, in the same promo for the season, this woman appears to be questioning Austen about sneaking into Chelsea's room during a group trip. Austen, man, what are you doing?

Then again, in a promo for Episode 4, Shep asks Austen if he and Peyton — one of the finalists from Shep's show RelationSHEP — are going out. Austen is sort of like mini version of Shep, so it would make sense that they'd be interested in the same women. Her Instagram is private, but she does seem to be living in Charleston at the moment, so it's possible they hung out a few times before he settled down with Madison, if that's indeed who he's dating.

But he might be getting *too* comfortable living that Shep lifetsyle. If he is dating someone, let's hope he's found a job. This season, Austen is what he calls "funemployed," meaning that he has no job. He quit his sales job in the beer industry and now just seems to spend most of his time hanging around bars, tasting beers, and asking too many questions. Fans are noticing that he's really riding that Shep wave. And they're not really happy about it.

It's probably best to not bet on any of these Southern Charm guys. They're a ton of fun and mean well, but it seems like it's hard for all of them to hold down a proper relationship with anyone on the show. Maybe that's why Cameran keeps her husband far, far away from the cameras, lest it rub off on him.

Fans will just have to see how this all plays out as the rest of the Southern Charm season unfolds.