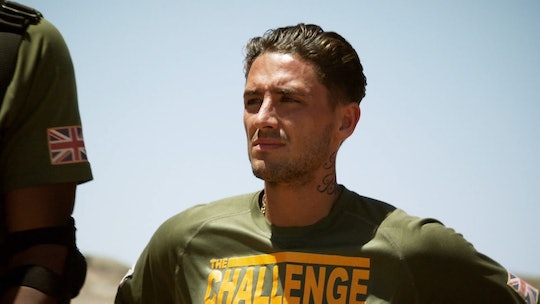 After this season of The Challenge, Bear will easily go down as one of the most memorable players of the game. He has been manipulative, confrontational, and downright rude, but he’s been a tough competitor too. You almost have to respect his game — almost. In a clip from tonight’s episode, Bear’s social ranking goes even lower when he video chats his girlfriend at home. But fans are going to be wondering who Bear’s girlfriend is on The Challenge since he was clearly hooking up with Georgia at the same time.

By potentially cheating on his girlfriend, who Bear says in the clip is his cousin (please), Bear has not only done wrong by her, but by Georgia, who likely had no idea he had someone else back home. It’s the kind of drama that longtime fans of The Challenge live for in between competitions. But I have a feeling Bear will somehow come back from it, like he has with every other boulder in his way this season.

Before Bear left the UK for The Challenge, he was dating model Ellie O'Donnell, who appears to be the same woman in his video call on tonight’s episode. After learning about his relationship with Georgia, however, she might have called it quits with the UK reality star.

In an Instagram story in December that she has since deleted, Ellie told her followers that, at the time, she and Bear were no longer dating. There are also no longer any photos of them on her Instagram, and since then she hasn't added any, so they are more than likely still broken up.

"I'm just putting this out there as I've had a million messages about it and want to clear it up — Stephen [Bear] and I are no longer together," she wrote in her story. She continued with, "He is still currently away filming for a show so he isn't active on social media until he is back, which is why everything of me is still on his Instagram." She didn't give any more details other than to clarify that she was the one who ended things, but not long after, Bear spoke to MailOnline about the breakup and insisted that he wanted to win her back.

"I cheated on Ellie with somebody else and she found out about it," he admitted. "We were going through a hard time, always arguing. It wasn’t nice at the end." He said that afterward, she accused him of cheating with someone else, which he didn't confirm to MailOnline. "I’m in a better frame of mind now and I need to work on myself a little bit and hopefully I can prove myself to her," he added. "I don’t want no one else. I want to have kids with her and no one else. I just need to prove myself."

Ellie is known for her modeling career and being an Instagram influencer, but her first big foray into the spotlight was probably when she was in the running for Miss England 2016. She didn't win, but she did make out with more social media followers and the beginning of a modeling career that eventually saw her in the social circles of different UK reality TV stars. That is likely how she met Bear and, it seems, she might have known Georgia before Bear started shacking up with her on The Challenge this season.

Both women recently posted on their Instagrams about Love Island Season 3 cast member Mike Thalassitis, who was found dead in a North London park on March 16. Even though Ellie herself isn't known for making the UK reality TV rounds, she seems to know everyone Georgia knows, which probably made the news of his relationship with his Challenge co-star that much worse.

So far, it looks like Ellie has moved on and when she isn't doing photoshoots in places like Portugal and Barcelona, she’s busy posting selfies and living it up, sans Bear. He might still be intent on winning her back, but she seems to be doing just fine without him.