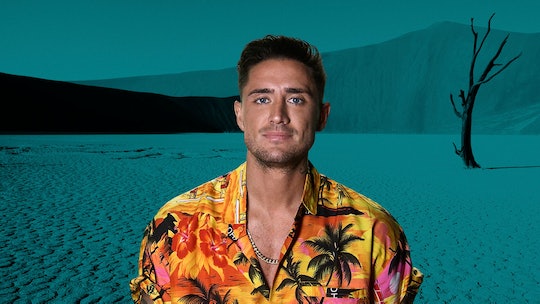 At this point in the season, the general consensus is that Bear is the most annoying player on The Challenge: War of the Worlds. He has been unafraid to stand up to veteran players and one by one, he has helped take out strong competitors. While he might have thought he was doing other players a service by acting obnoxious, most of the tweets about Bear on The Challenge prove that his time is running out on the show. It's one thing to just rub people the wrong way and get under their skin to throw them off their game, but Bear is taking being the season's resident drama starter to a whole new level.

Bear has targeted some top veteran players so far this season, including Wes, Paulie, and Zach. I totally get that he has to remain true to his U.K. alliance, but in doing so, he has made some enemies. And I'm not just talking about his fellow Challenge players. Fans have called for Bear's elimination on The Challenge ever since his over the top annoying behavior began a few episodes ago. If he continues this way, someone on the show is bound to take him out.

Some fans just feel for Da'Vonne, who unknowingly got the short end of the stick when she picked Bear to be her partner. Now, she has to deal with the fallout of his behavior every week as he makes new enemies.

Other fans of The Challenge just can't stand Bear at this point. Last week he threw himself on a table while other players were trying to relax with a game of a cards. But despite his behavior, he has managed to keep himself safe in the game, and that has also gotten to some fans.

Bear also seems to be playing Georgia in order to maintain her support. Like Bear, she is part of the U.K. alliance and she has been his number one cheerleader this season. But he's clearly using her romantic feelings for him in order to have an advantage in the game and that's just not cool.

Some fans remember Bear from his many stints on reality TV in England and, as one fan tweeted, this behavior was common when he competed on Celebrity Big Brother U.K. Season 18. He also won that season, though, so that could mean he's going to come out on top on The Challenge, which would be a nightmare for some viewers who are ready to see him get eliminated.

In a clip from tonight's episode that was posted on The Challenge Twitter account, Bear takes his antics even further. During a competition in which one team member is blindfolded and the other can only see through blurry VR goggles and navigate them on a ledge 100 feet in the air, Bear screams out to try and throw off Paulie and Natalie so they lose the competition. At first Bear is just being Bear, but it gets to the point where other players are getting annoyed whether they are also gunning for Paulie and Natalie or not. According to some fans, Bear has become a problem, plain and simple.

I would say that Bear's behavior is going to get him eliminated, but there is more to staying in the game than having the right social impact on the other players. Even if he and Da'Vonne are put on the killing floor, they can always win the competition and stay in the game, much like they did last week. Bear is definitely on almost everyone's last nerve, but he's also a strong competitor, so he's probably going to be sticking around for a little while longer.