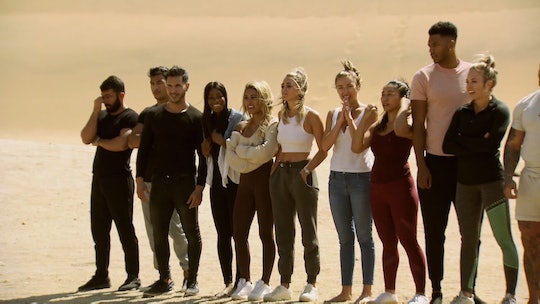 Things are off to a heated start on The Challenge: War of the Worlds. Drama between returning competitors has come rushing back to the surface and with $1 million on the line, everyone is out for blood. In the first ever elimination match, former partners Ashley and Hunter faced off and after Hunter and his newbie partner Georgia won, T.J. introduced a "relic" to the game. But what is a relic on The Challenge and what does is mean for the game moving forward? T.J. didn't give any details about the significance of the mask at the end of Wednesday's episode, which he referred to as a “relic,” but he did make it seem important for the winners of the elimination competition.

The Challenge is always about the twists. If you think someone is out of the game, they could show up again at some point in the season. If you're secure in one partner, don't get too comfortable, because you could be forced to go against them later on. And the addition of a physical object to use against another player is nothing new. In Season 31, The Challenge: Vendettas, there were "grenades." These were punishments that previous elimination challenge winners could place on any other players in the game. This could be the case with the relics this season, but either way, the relics likely hold a lot of power for the team left safe on the Killing Floor.

Another possible benefit from the relic introduced at the end of Wednesday's episode is that it will keep a surviving team in an elimination challenge safe. As seen in the first match, two teams will battle it out in the challenge to determine who goes home and who gets to stay on to continue the game. In this case, Hunter and Georgia beat Ashley and Chase to be able to stay in the game. They were awarded a relic, which could potentially mean their safety in the next elimination challenge on the Killing Floor.

A relic could also be a different kind of power. Typically, the three best teams from an episode's competition are given the duty of putting three other teams up for a vote to be put on the Killing Floor. A relic this season could automatically give the previous winning team from an elimination challenge the power to have a say in who is put up for a vote, regardless of how they do in the next big competition. It might also give them the power to take someone out of the running for an elimination round.

Unfortunately, the show left us hanging at the end of the episode when T.J. introduced the season's first relic to Hunter and Georgia, the elimination challenge winners. But but regardless of what a relic is on The Challenge, it's definitely going to kick things up a notch.

Since T.J. introduced this new twist so early in the season, chances are, relics will show up continuously after elimination competitions and maybe even other times when the stakes are high. They could also come in other forms than the mask and have different powers to keep the game interesting and bestow rewards or consequences on different players. If The Challenge has taught fans anything, it's that the game is never boring and these relics are likely designed to keep everyone on their toes.

Relics will probably be explained in much more detail next week, and until then, there are still several teams who are safe. The season is definitely already bananas, and no, I'm not talking about Johnny. Hopefully things don't get too out of control with a new power on the loose.