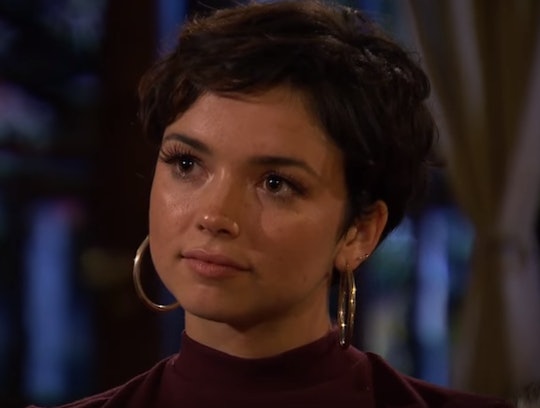 This Is Everything We Know About Bekah Martinez's Boyfriend

It looks like the Bachelor Nation is getting a new member in the near future. Bekah Martinez, who was on Season 22 of The Bachelor, just announced that she's expecting her first child in the coming months. But it's obviously not with the bachelor from her season, Arie Luyendyk Jr. No, Martinez has moved on and is happily ensconced in her "own private paradise," as she explained on Instagram, with a new man. Bekah Martinez' boyfriend Grayston Leonard is the father of her baby, and the couple seem so incredibly excited about the news.

Martinez was pretty low-key about her relationship with Leonard initially, only breaking the news after word was spreading on social media that she might be on Season 5 of Bachelor In Paradise back in July. The actress decided to let her fans know that she and Leonard were an item with an Instagram pic of the two back in July. While July might have been the official public acknowledgment of their relationship, Martinez has been dating Leonard, who is the founder of Long Beach Rising Climbing Gym (set to open in 2019), for around seven months. Seven months of getting to know each other, taking adorable selfies... and eventually becoming parents.

Martinez and Leonard met through friends, as she told People TV's Chatter, and said they "just hit it off" right away. Still, that didn't mean she was ready to share their relationship with the public right away.

We’re just keeping it on the DL… Didn’t want a bunch of people speculating and chiming in on the Internet. And also, you don’t want it to be one of those things where you’re with somebody for two months and then post stuff about it and then break up and have to deal with all that.

As the two began dating and getting to know each other, one might think that Leonard might take a deep dive into The Bachelor to see what Martinez was like on the show. You know, for a little added insight. Apparently not. As Martinez told Chatter:

His friends were like, ‘Dude, are you gonna watch it?’… And he was like, ‘No, I don’t want the show affecting my opinion of who I know her to be.’

That being said, Leonard is apparently managing to navigate the choppy waters of dating a reality star, as Martinez told Heavy:

He’s pretty familiar with it now, but it definitely is weird, especially when we travel out of state… I think people in L.A. are a lot more chill. We were in Utah and Colorado, and people don’t quite have the same sense of personal space there.

It's possible that Leonard's own work in the wellness industry helps him stay grounded. He is an athlete, a fitness coach, and a dietitian. His Long Beach Rising Climbing Gym is apparently going to offer a unique experience as a "premier Bouldering Facility offering Yoga, Fitness, Sauna and Coffee.” Which sounds like one of those mind/body experiences that encourages mindfulness and such.

This should also help him when he becomes a father for the first time in January 2019. Martinez, who told Pure Wow that she is 20 months pregnant, initially told Leonard she was pregnant on Father's Day. And while it apparently took the expectant dad a little while to get used to the idea, he told the news outlet he's getting excited to meet his baby now:

As it’s gone further, almost every day becomes happier for me. She’s got a little bump now. Her belly button’s starting to push out. It’s like all of these things make it really fun and real. It’s this transforming moment from ‘If I have to, I’ll do it. I’ll be a good dad.’

Bekah Martinez might not be set to appear on Bachelor In Paradise any time soon, but I have a feeling she'll take this real paradise over that one every day of the week.

More Like This
Hilary Swank Announced She's Pregnant With Twins & Shared A Cute Video Of Her Bump
Tia Mowry & Cory Hardrict Announced They Are Divorcing After 14 Years Of Marriage
Tom Brady & Gisele Bündchen Have Both Hired Divorce Lawyers
Kate Middleton Shares Insight On What It Was Like Naming George, Charlotte, & Louis