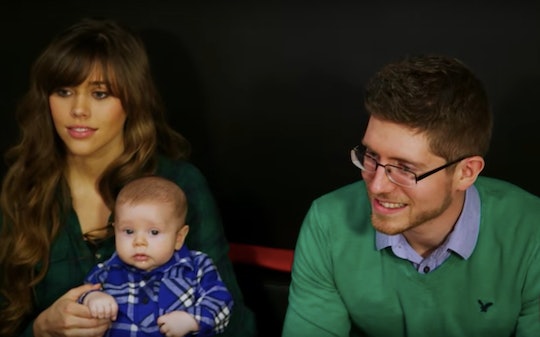 Everything 'Counting On' Fans Need To Know About Jessa Duggar's Husband, Ben Seewald

The Duggar family is always growing. At the moment, one Duggar is preparing to get married, another has welcomed her first child and two more are preparing to give birth in the coming months. But, that doesn't mean that fans have forgotten about the Duggar kids who aren't in the midst of a major life event. Given recent headlines about Jessa Duggar contemplating another baby, you may be wondering who her husband, Ben Seewald, is. Jessa Duggar's other half has actually been in the Duggar inner circle for quite a while, but in case you need a refresher, here's what you need to know.

As reports have circulated recently that the happy couple is wanting to get pregnant again, as People reported, you may have forgotten Seewald's story and how he and Duggar even got together in the first place. After all, it's been a while, and with so many other things happening in the Duggar family, it's kind of hard to remember who is who, ya know, outside of the original 19 children the Michelle and Jim-Bob Duggar have.

Aside from being Duggar's husband, Seewald is also the father to the couple's two children, 2-year-old Spurgeon Elliot and 1-year-old Henry Wilberforce. The two have been together since 2013 and are a pretty solid couple. They certainly aren't as controversial as Duggar's brother, Josh Duggar, and his family, or even her sister, Jill Duggar and her husband, Derick Dillard. On the contrary, the Seewalds aren't really clouded by controversy, aside from the random bouts of mom-shaming. So, who exactly is Ben Seewald?

Unsurprisingly, Seewald is also a devout Christian, just like all of the Duggars. According to the couple's website, Seewald explained:

I believe that Jesus purchased my salvation with his blood, and by God's grace and mercy, I am now a Christian soldier fighting under Christ's banner. I want to follow where Christ leads me.

Of course, considering the fact that Seewald and Duggar stuck to the family's strict courtship rules before getting married, as People reported, it was clear that Seewald has been dedicated to the same morals and beliefs.

Also on the couple's blog, Seewald explained one of his greatest passions in life was standing against abortion. Obviously, abortion is a highly-controversial topic all over the world, but Seewald makes his stance clear:

Abortion is murder, and it is tolerated today in the nation which I live. I will not stand by and do nothing while unborn human beings are daily being brutally sacrificed on the bloody alter of human convenience.

Seewald also added in the same post that he hopes to one day see abortion be completely "abolished and eradicated from the face of the earth."

In a 2016 episode of Counting On, Seewald decided to try his hand at something he truly loves: music. Well, specifically, Christian rap. In the episode, "Ben Seewald tried his hand as a hip-hop artist when he and his wife visited some Christian rappers in St. Louis, Louisiana," according to Entertainment Tonight.

OK, so Seewald definitely isn't progressive in the traditional sense of the word, and he still leans to the right when it comes to politics. But, as In Touch reported, "He has openly supported Black Lives Matter, has tweeted his support of the #TakeAKnee movement, and even conducted an interview with rapper Flame about how Christians should fight racism together."

And while those things might not seem like much, the 23-year-old has also used his Twitter page to retweet comments against white supremacy and Donald Trump, per In Touch.

He Helped Introduce Jinger Duggar To Her Husband

As funny as it sounds, Seewald and Duggar actually met her sister, Jinger Duggar's, husband before she did. On a trip to San Antonio, Seewald met Jeremy Vuolo and the two hit it off. On his blog, Vuolo explained:

It wasn’t long before we developed a friendship and two and a half months later I made a trip to visit Ben and Jess and it was then that I met Jinger and the rest of the family.

So, without Seewald, there might not be a Jinger and Jeremy, and that's not a world worth living in.

Of course, as both Duggar and Seewald seemed to seriously think about having another kid in the latest trailer for the upcoming season of Counting On, who knows how much the family will be growing? "What if we have another kid by the end of four years?" Seewald asked Duggar, per People. And while there's no word on whether or not the two are expecting, Counting On fans are eager for an update.