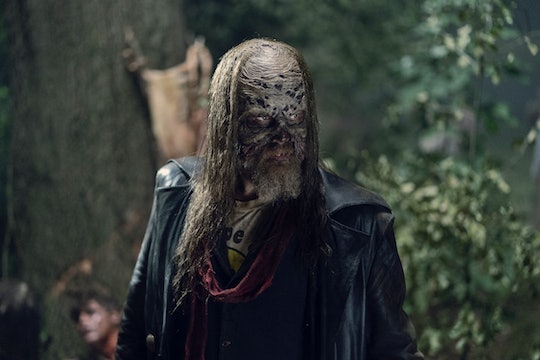 The second half of The Walking Dead Season 9 has felt like an entirely different season and for good reason. There’s a new big bad in the form of Alpha and the Whisperers, but now, there is someone else to be afraid of — Beta. He is Alpha’s right hand man and fans of the comics remember him as a formidable force. But if you haven’t read them, you might be wondering who Beta is in The Walking Dead comics. In short, he’s bad news and he makes Negan look like child’s play.

That might be a bit of a stretch because Negan was arguably one of the most ruthless villains The Walking Dead has seen, but the Whisperers in general are more animalistic than anything. On last night’s episode, viewers saw Alpha brutally kill two possible defectors and then force her daughter to almost fight to the death with Henry. There is very little honor among the Whisperers and Beta is up there with the worst of them.

In The Walking Dead comics, Beta is Alpha’s second in command who later becomes the leader of the Whisperers when she dies. He acts as the primary antagonist for a few volumes of the comic series before he’s finally defeated, and I can see his arc playing out over the next couple of seasons or at least for the majority of Season 10. In the comics, he’s ruthless and will effortlessly murder anyone he needs to for his survival and for the good of the rest of the Whisperers. He’s also a former NBA player, but judging by his stature in the show, they might rewrite him to be a former NFL player. The guy is a straight up beast.

In the comics, Beta is loyal to Alpha almost to a fault and has strong feelings for her that verge on romantic. I don't think Alpha has any interest in that in the show, given who she has become since the zombie apocalypse began, but she might use his feelings to her advantage so she can maintain control over him.

Beta is also part of the big Whisperer War from The Walking Dead comics. After Alpha dies by the hands of Negan, Beta leads a war against Negan and all of the other communities. One by one, Beta tries to destroy all of the communities that the others have worked hard to rebuild. I’m not sure how close the show will mirror the comics in that respect, especially if the upcoming fair helps join the communities together, but a war is probably coming.

In the promo for next week’s episode of The Walking Dead, Beta is described as the strongest among the Whisperers and, chances are, he’s about to prove that as he searches for Daryl and Connie, who helped Henry and Lydia escape the Whisperers’ camp. Ryan Hurst, who plays Beta and is most well known for his role as an intimidating member of a biker gang on Sons of Anarchy, spoke to TV Insider about being one of the main Whisperers on The Walking Dead.

He revealed that fans have come up to him over the years and told him that he should play Beta long before he even knew much about the character. But upon being cast for the role, he used other imposing forces in movies as examples to bring the intimidating character to life on The Walking Dead.

"I drew some inspiration from Anton Chigurh, the antagonist character in No Country for Old Men," Hurst said. "He was so wildly insane and impenetrable and so psychotic. And I remember in Javier Bardem’s performance, it was so eerie because he did so little, but he said so, so, so much with his presence. So I used that. A little bit of Anton Chigurh, a little bit of Jack Sparrow in the costume."

It’s still a little early to tell how closely Beta in the show will resemble Beta from The Walking Dead comics, but he already seems like an almost indestructible villain.