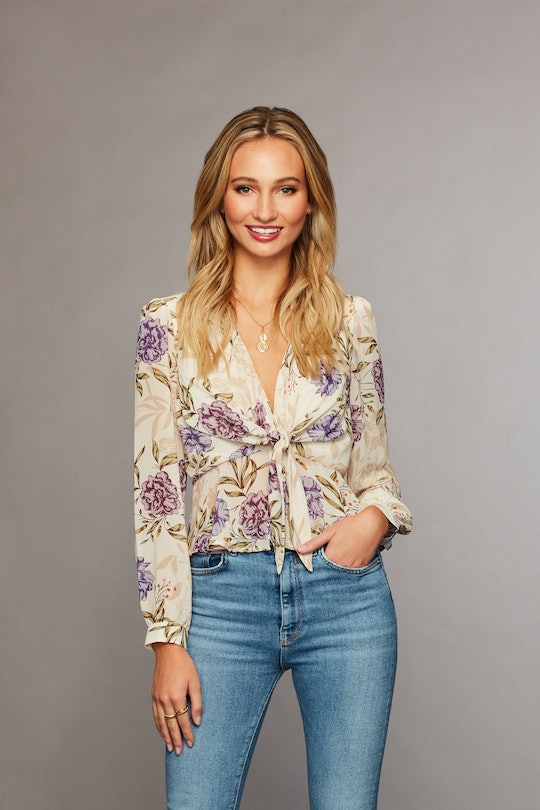 Brianna On 'The Bachelor' Already Has Fans Curious

Most Bachelor contestants will do whatever they can to make a lasting first impression on their potential suitor, including telling him corny jokes and wearing costumes in a sea of glittering gowns. You'd better believe that Colton’s season isn't going to be the exception and one contestant, Brianna, is already making waves for her fake Australian accent. It isn't the most interesting thing about her, though, and after promos have come out, fans are wondering, who is Brianna on The Bachelor? As someone who’s used an accent or two to make bedtime stories extra interesting for my son, I can appreciate a good fake accent. And since Brianna has already gotten America’s attention before the season has even officially premiered, she’s sure to be one of the more memorable contestants for Colton too.

According to Brianna’s Bachelor bio, she’s a 24 year old model from California but she’s "much more than just a pretty face." Her biggest dating fear is farting too loudly, so I don't doubt that there’s a lot more to her than her career of choice. The fact that she embraces her flatulence, however, puts her up a few rungs in my personal Bachelor fantasy roster, because, relatable AF. She has been modeling since she was 14, though, so it’s definitely not something she picked up to gain some Instagram likes. Although judging by her more than 37,000 followers, I’d say The Bachelor contestant already has some fans.

In the promo currently floating around the interwebs, Brianna makes her limo debut on The Bachelor and greets Colton with a spot on Australian accent. He immediately falls for it, because why wouldn't he? Cleverly, she asks if he likes the accent and says that she hopes he’s a sucker for accents, without really admitting that it's all a gag. I’m super interested to see how this plays out and I hope The Bachelor Powers That Be don't let Colton send her home the first night. If she’s willing to make light of her first impression and do a fake Australian accent, I’m ready to see what else she’ll do this season.

Brianna was also, at one time, a host on Globe Trekker, a travel show on PBS. It's unclear if she still works with the long running series, but her love of traveling for work and in general helped land her the role years ago.

One reason why Brianna seems to be scary good at accents could be all of the traveling she’s done for work. In her host bio for Globe Trekker on PilotGuides.com, the Canadian-born model said the only place she ever had a true culture shock was the United States. Of course now she lives in California, but she’s been all around the world to China, England, France, Germany, Greece, Japan, Scotland, Italy, South Korea, Guam and yes, Australia.

Brianna said that besides modeling and sometimes acing, she has a thirst for almost constant adventure. "I find the things that I regret most in life are the things I didn’t do because of planned budget or fear," she said. "Although some people would be hesitant travelling alone, especially being a female that weighs 125 [pounds], there is nothing like accomplishing something that everyone else was afraid to do."

In this case, she probably won't regret that Australian accent on The Bachelor season premiere if it means getting Colton’s attention long enough to explain why she should get the first impression rose. Or, at the very least, one of the other many roses he’ll be handing out in the wee hours of the morning.