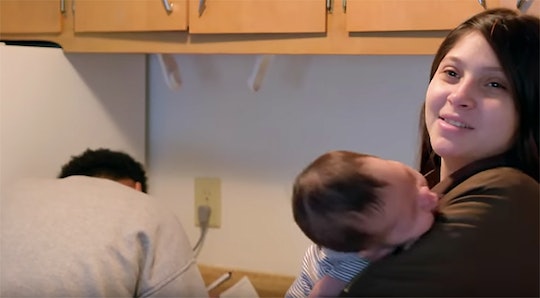 Brianna Jaramillo on Teen Mom: Young & Pregnant gave birth to her first child, Braeson, in August 2017. Although Jaramillo's boyfriend at the time, Danae Young, offered to step up as the child's father, their modern family didn't end up working out. And given the lack of father figure in Braeson's life, it's fair to wonder who is Brianna's baby's biological father.

Jaramillo and her mother recently made the move from their home in Wisconsin to Oregon, a change that was a bit tough on the reality star. Not only did Jaramillo leave her sister behind who often helped with Braeson, but the change likely led to the demise of her relationship with her boyfriend, Robert Reams. And once in Oregon, Jaramillo realized how difficult it was to parent without a wide circle of support.

"I don’t talk much about my sister. But her leaving me to back to her home in mke was really hard," Jaramillo wrote in July, according to Instagram. "@finessa.vanessa you have been a huge role model and my best friend. You have taken care of me and had my back through everything."

Reams was a big help too, regularly hanging out with Braeson and contributing to his development. "Braeson loves shrek 2 😎," Reams captioned a cute shot of Braeson in June.

But now that Reams and Young are both out of Jaramillo's life, it's reasonable that fans are curious about Braeson's bio father. And by the looks of it, the topic will be covered on Monday's episode of Young and Pregnant.

"Is Braeson’s dad coming back into the picture? @TeenMom: #YoungAndPregnant is new tonight at 10/9c on @MTV!," Jaramillo captioned an Instagram post.

The only information fans know about Braeson's bio dad so far is that he chose not to be in the little one's life. When Jaramillo told Braeson's father about her pregnancy, he allegedly hung up on her and blocked her number.

Additionally, the bio father wasn't a long-term boyfriend of Jaramillo's. While on a break from Young, Jaramillo had a fling with this person, which resulted in Braeson's conception.

If Braeson's father does want to play a role in his life, there's a good chance fans won't approve of it.

"Hahahhaha he wants to be on MTV now lol or how much you think MTV is paying her to let him back in for the drama and views??" someone commented on Jaramillo's Instagram post.

Another person chimed in: "Oh now he wants you and the baby. HELLO MTV!"

"You don't just get to pop up in your kids life a year after he's born on YOUR terms," one commenter pointed out. "That's not how being parent works. Not even a little bit."

As for Jaramillo? She's not interested in reaching out, a sentiment that came to light during a conversation with her mother about child support benefits. Considering Jaramillo doesn't know where Braeson's dad lives, finding him would be difficult at best. And for Jaramillo, she's not thrilled about forcing someone to be an active parent. "It's not my job," Jaramillo argued in a video clip about the situation.

Of course, this is a complicated decision that Jaramillo doesn't have to make overnight. The most important thing here is Braeson's well-being, whatever that might look like.