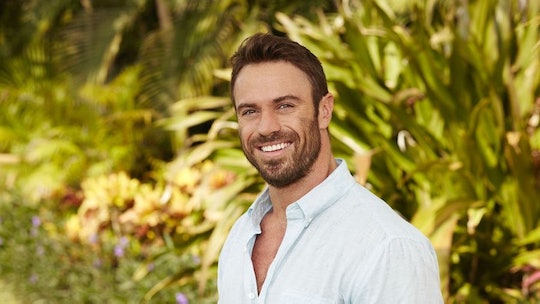 When contestants like Chad Johnson on The Bachelorette are labeled the villain of the season, I try to give them the benefit of the doubt. But after he proved time and again that he was out to make enemies, Chad earned his title. Now, after continuing to tarnish his image on other reality TV shows, he’s going to be on Ex on the Beach Season 2. Fans are no doubt questioning who Chad Johnson’s ex-girlfriend on Ex on the Beach is though, and Madeline Sullivan definitely seems like a catch that he let get away. Or maybe she ran away. I like to hope that reality TV “bad guys” aren't really that awful in real life, and if Chad wooed her once, he may have had something going for him other than biceps and a penchant for scarfing down protein.

It’s unclear how they met or how long they dated, but Madeline is the ex MTV picked to show up for Chad. Whether they still have feelings for each other remains to be seen. While it might seem like Chad would date reality stars above all others, if only for the additional 15 minutes of fame, Madeline is actually a singer and songwriter. She started writing and recording songs when she was just 15 years old and went on to study at the Academy of Contemporary Music at The University of Central Oklahoma and Oral Roberts University while still recording music.

Madeline also models and has appeared in commercials, according to her website, and music and modeling seem to be the biggest part of her career right now. Her personal Instagram is private so it’s unclear if she’s seeing anyone else outside of Ex on the Beach or if there are still any old photos of her with Chad, which would honestly be the best thing ever. Her Instagram account as a singer does have a flyer from an Oklahoma University music festival she performed at in April 2018 and there’s a link in her bio to her YouTube page with one video of Madeline singing at what may have been the same outdoor show.

Since Madeline was willing to go on Ex on the Beach, I’d imagine she’s still trying to break out as a singer or, at the very least, as a model. She’s appeared in different fashion shows in person and has modeled with the Linda Layman Agency for a few years. She also may or may not have made a connection with fellow Ex on the Beach star Corey Brooks.

Corey is best known for Big Brother 18, and they’ve recently exchanged some semi flirty tweets that make it seem like they made a connection while filming. It would also be adorable if they did since he's basically the opposite of Chad. Of course it’s all speculation and hard to tell for certain since Madeline’s personal Instagram is private, but anything can happen in paradise.

Her Instagram bio does say that she’s a mom, so that could have something to do with trying to keep part of her life private. On Dec. 6, she tweeted about how her baby’s father cheated on her and left her for another woman he then impregnated and married and joked that she should have been on Teen Mom.

Anyone who followed Chad on The Bachelorette or Big Brother U.K. will probably be curious to know who the woman is that dated him, potentially after seeing him on reality TV first. So far, Madeline seems like she legitimately wants to find romance on Ex on the Beach, but it’s never that easy.