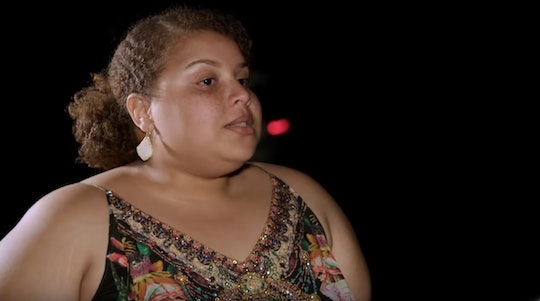 TLC’s newest 90 Day Fiancé spin-off, The Family Chantel, just premiered, but it is already delivering the drama fans ate up when Chantel and Pedro first graced their screens in Season 4 and then again on 90 Day Fiancé: Happily Ever After? Season 4. Clearly, fans can't get enough of their joint family’s antics, and part of the drama now includes Chantel’s sister, Winter. But who is Chantel’s sister on The Family Chantel?

Unlike Chantel, Winter didn't initially bring a ton of relationship drama to the show, but after their parents have focused so much of their attention on Pedro and his family, Chantel now seems intent on bringing some of their concerns to Winter’s boyfriend. While her boyfriend, introduced on the show as Jah, is someone she has been with for years, Chantel pointed out to her mom that the family still knows very little about him. So whether or not Winter wants to be the focus on The Family Chantel for a little while, it looks like she is stepping into the spotlight herself. Naturally, fans are curious about her.

Outside of the show, Winter’s life seems pretty low-key. Like she explained on The Family Chantel, she spends a lot of time with Jah’s daughter, who she considers her own child, and she seems to keep the majority of her private life private. Now that she is part of the main cast of a TLC reality show, however, that might prove to be a little more difficult.

Winter’s Instagram shows how close-knit her family is, just as The Family Chantel would have you believe. While there are no photos of Jah, there is an adorable video with Jah’s daughter she recently posted. So despite Jah preferring to keep himself off her social media, they seem to still be going strong. There are also tons of body positivity posts that most of Winter’s followers seem to love her for. As fans have seen on all three shows from the 90 Day Fiancé franchise, Chantel’s family shares a lot together and Winter’s Instagram shows how close they are off camera too.

On what appears to be Winter’s LinkedIn profile, she doesn't have any current or recent employment listed, but most of her interests include makeup or hair care lines and her Instagram bio says that self-care is important to her. It’s possible that Winter plans to get more involved in cosmetics or hair care or that she already is, but prefers to keep that aspect of her life on the down-low since she’s on TV now.

Winter also has a Backstage profile which lists her performance skills as dancing, acting, singing, doing voice overs, and writing character dialogues. Given Winter and Chantel’s brother River’s own singing career, it’s no surprise that Winter also seems to have performing aspirations. It’s not clear, however, if Winter has performed in any stage or TV productions outside of the family’s new show.

Right now on The Family Chantel, Chantel is intent on getting her parents to launch an investigation into Winter’s boyfriend, similar to what they did with Pedro at the start of their relationship. It might just be for the sake of drama and for Chantel to shift some of her family's critical spotlight from her for once. But Winter still seems to be close to her family despite whatever meddling they might do and that seems to be a running theme on The Family Chantel.

Because of this new focus on Winter, chances are, fans might see a little more of her private life moving forward this season. She seems to be all about happiness and positivity and on a show with as much drama as this, she’s going to need it.