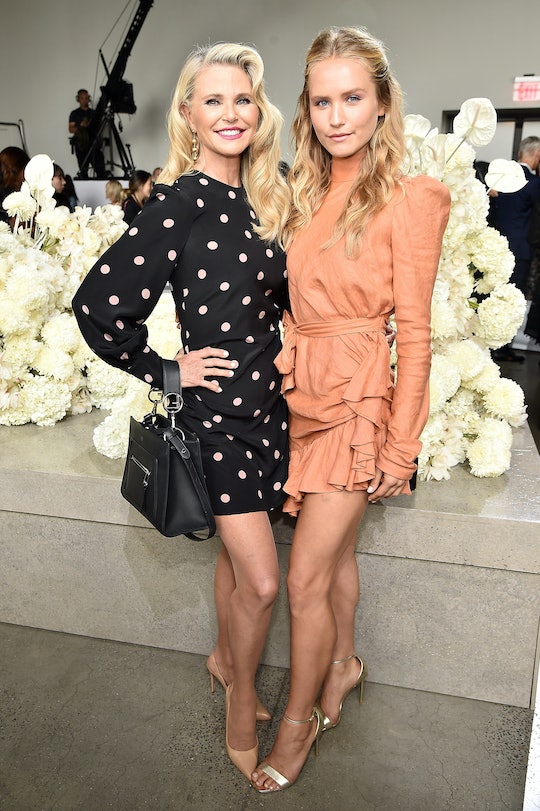 Christie Brinkley's Daughter Is Taking Over For Her On 'DWTS'

When Christie Brinkley broke her arm during a Dancing With the Stars rehearsal Thursday, she had no choice but to step down from the season. Then, when her daughter, Sailor Brinkley-Cook, rushed to see her after her fall, she was asked to do more than check up on her mom. Brinkley-Cook was asked to fill her mom’s shoes (literally) as her replacement for the season. She accepted the challenge, but there is a lot more to know about who Christie Brinkley’s daughter is on DWTS other than the fact that she's a brave soul for agreeing to compete on a live dancing competition show in the eleventh hour.

Brinkley-Cook is 21 years old and the youngest of her two other siblings. She also followed in her mom's footsteps as a model. Her Instagram is full of professional shots taken at various places around the world and she has been featured in multiple shoots on the Sports Illustrated website. She is also a runway model, according to her portfolio on the IMG Models website.

Although Brinkley-Cook has a look that’s all her own, in some photos, she is the spitting image of her mom. It’s no wonder that all of her mom’s DWTS tailored costumes fit Brinkley-Cook to a T. But outside of modeling, she has some other big interests and aspirations.

Brinkley-Cook is also a photographer and was a guest photographer at Sports Illustrated’s open casting call in 2017. There are also some professional shots on her Instagram, showcasing her talent. She was enrolled in the Parson's School of Design in New York back in 2016 and while it's unclear if she still attends school, she might have picked up some important skills for her rising career.

At the time, she shared with HELLO! magazine that she was excited to get behind the camera to study photography rather than spend more time in front of it. "I love modeling and I’ve been shooting a lot recently, like over the summer," Brinkley-Cook said. "But school right now is my main priority."

Now, as a DWTS contestant, she will soon be able to add professional dancer to her resume. And she may have learned a thing or two about gracefulness as a model and discipline as a photographer to help her along her way.

Outside of work, Brinkley-Cook has been dating a guy by the name of Ben Sosne since at least March and as of late, her Instagram is full of photos with him. In July, he posted a set of photos of Brinkley-Cook on Instagram in honor of her birthday with a caption that included, "I'm so lucky to wake up to your beautiful smile everyday and watch you grow into an incredible person." I’d say they are pretty serious.

Brinkley-Cook is also all about body positivity and posted a photo with her mom and sister back in February in which she opened up about her own struggles with body image. In the caption, she wrote, "My body carries me each and every day, it loves the people I love, it holds what makes me healthy and strong, it bends it shakes it runs and it changes. That is okay and that is beautiful."

She regularly posts similar captions to encourage her followers to feel the same way or to uplift her sister and mom. And even though she is a brand new addition to the DWTS Season 28 cast, she will likely be able to embrace the new challenge and adventure with the same kind of vigor she has with everything else she does.