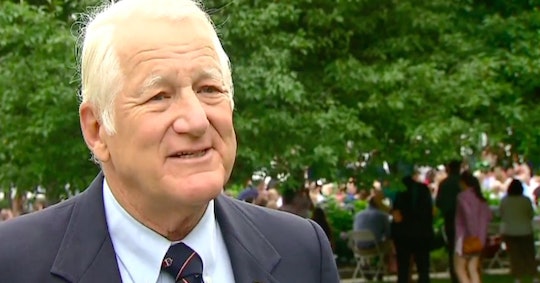 I'm not going to lie — I feel like I need to preface this with a Lemony Snicket-style disclaimer. The news that will follow is troubling, to say the absolute least, and triggering at worst. You might want to look away. But here it goes: A Republican member of the Representative Town Meeting in Greenwich, Connecticut, Christopher von Keyserling, allegedly sexually assaulted a colleague in the town's government offices. A sexual assault is terrible enough, but von Keyserling actually allegedly "pinched" the woman's genitals, in the exact same way that President-elect Donald Trump described doing on those leaked Access Hollywood tapes before the election. Romper's request for comment from von Keyersling's attorney was not immediately returned.

There are tapes that Greenwich police say corroborate the woman's claim and Keyserling's lawyer told local Connecticut station News 12 that the GOP politician allegedly pinched the woman's genitals as a joke. "Von Keyserling playfully gave a lady who he knew for 30 years a pinch is what the accusation is. And somehow, everybody’s wringing their hands and carrying on that this is a crime, and it just isn’t," he said in defense of his 71-year-old client, who was charged with fourth degree sexual assault and posted a $2,500 bail.

You need a break for a deep breath? Me, too. Here's a puppy:

The 57-year-old woman reportedly told von Keyserling in a brief discussion that it was a "new world order" when it came to politics and that von Keyserling should educate his peers. He then reportedly told her, "I love this new world, I no longer have to be politically correct." Which pretty much sums up every feminist's fear of what the incoming administration signifies to their supporters.

The woman then allegedly retorted that she "couldn't help him," to which he responded by calling her a "lazy, bloodsucking union employee." According to the warrant, she told him to "f—k off" and walked into her office. Keyserling followed her into her office, under the pretense of speaking with the 57-year-old woman's co-worker. The co-worker refused and as the women walked out of the office, Keyserling allegedly pinched her genitals. She alleges that he looked back at her and said, "'it would be your word against mine and nobody will believe you."

Not only did von Keyserling allegedly sexually assault her, he also allegedly verbally abused and threatened the woman. Yet, the warrant states that he talked about the groping in the office and called it a "joke" and a "misunderstanding." But there's no confusion for the woman, who had her genitals grabbed (there's something so violent and possessive about the word "grab") against her will.

Luckily, von Keyserling already seems to have reportedly been proven wrong about his idea that no one would believe the woman, as there are security tapes showing him allegedly assaulting her. Although we have a president-elect who, by his own admission finds the idea of "grabbing" women by their genitals amusing, let's hope for everyone's sake that the woman was right about it being a "new world order" and he doesn't get away with the crime if found guilty.

There is nothing funny about grabbing a woman by her genitals. Period.