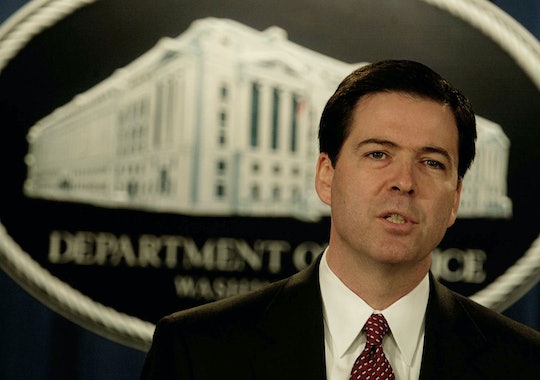 There are just some things you should not do over Twitter. Spoil plots to television shows, propose marriage to your long-term partner, and announce your pick to lead the U.S. Federal Bureau of Investigation. But that unspoken rule hadn't stop President Donald Trump from nominating the next FBI director on Twitter early Wednesday morning. So who is Christopher Wray? Trump's choice to run the country's domestic intelligence and security agency is a Washington-based criminal defense attorney and veteran of the U.S. Department of Justice.

According to NPR, Wray worked as an assistant attorney general under President George W. Bush, focusing on corporate fraud, trade sanctions, and money laundering. Wray held that position with the Justice Department for a few years before transitioning into private practice, where he has worked for 12 years. He is currently a litigation partner at the international law firm King & Spalding, NPR reported.

More notably, Wray, a former assistant U.S. attorney from Georgia, served as a personal attorney for New Jersey Gov. Chris Christie during the infamous Bridgegate scandal, Quartz reported. That wouldn't be the first time the pair met, though; according to The New York Times, Wray and Christie became close earlier in their careers while both working for the U.S. Department of Justice.

According to Quartz, Wray worked as Christie's lawyer during the Bridgegate investigation. As part of the probe, Christie gave up his phone to investigators who were searching for deleted texts between the governor and his aides. Christe was never charged with a crime, but two of his aides pleaded guilty in November for creating a fake traffic jam on the George Washington bridge in late 2013 to punish the mayor of Fort Lee, New Jersey, for not supporting the governor's reelection bid, Quartz reported. A woman died because of the days-long traffic obstruction.

Wray, who beat out Anderson University President John Pistole for the nomination, is also loosely connected to Trump and his family, according to Newsweek. Trump has already tapped other members of the law firm King and Spalding to work for his administration; former member Dan Coats works as the president's director of national intelligence, while firm partner Gilbert Kaplan has been nominated for under secretary of commerce for international trade. Bobby Burchfield, another King and Spalding partner, serves as the ethics advisor to the Donald J. Trump Revocable Trust, which holds the president's business assets, Newsweek reported.

As Quartz noted, Wray's nomination may not quell concerns among Trump's critics. Not only is the criminal defense attorney already connected to Trump by degrees-of-separation, he also has a history of defending companies and people under investigation by federal agencies including the Justice Department, Quartz reported. Both of those factors do raise questions over whether Wray will remain impartial as Trump's campaign ties to Russia continued to be probe by the government.

Trump's Twitter announcement comes the day before former FBI director James Comey is set to testify on Russia's alleged interference in the 2016 U.S. election. According to CNN Politics, Trump abruptly fired Comey last month allegedly because of his poor handling of the investigation into former Secretary of State Hillary Clinton's email server. But Comey later revealed that the president asked him to drop the investigation into national security adviser Michael Flynn, but Comey refused, according to BuzzFeed. That revelation led many to believe that was the real reason Comey was fired from his FBI post.

In order for his nomination to be approved, Wray would need a simple majority vote in the Senate. Experts believe he will most likely be confirmed since Republicans hold the majority of the Senate seats.