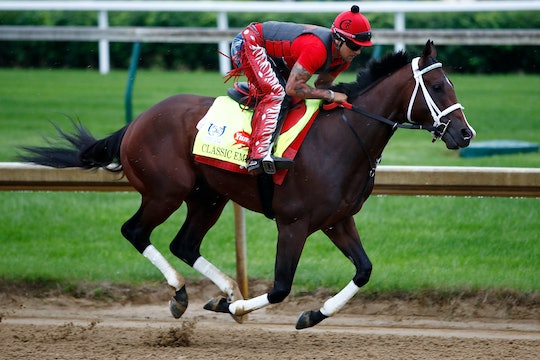 Who Is Classic Empire?

Everybody loves to be the favorite, right? Favorite friend, favorite student, favorite kid. Favorite horse who could end up winning $1.24 million. Actually, scrap the rest of that. If I could be any animal this weekend, I would want to be Classic Empire, the horse favored to win the 2017 Kentucky Derby on Saturday. Normally I pick a dolphin, but their earning potential simply doesn't measure up.

Classic Empire, a 3-year-old American thoroughbred owned by John C. Oxley and trained by Mark E. Casse, won the best juvenile in the United States in 2016 after winning the Breeders' Futurity and the Breeders' Cup Juvenile. He is only the third horse to win both races in history. While Classic Empire was tagged early on in 2017 as an odds-on favorite against fellow horses Irish War Cry and Gunneverra, he did lose momentum after placing third at the Holy Bull Stakes in February. He and his jockey Julien Leparoux have continued to struggle slightly throughout the last few months; The Washington Post reported that, while Classic Empire did manage to win the Arkansas Derby recently, the win wasn't without its challenges. The issues appeared to be caused by a painful foot abscess that has been taking longer than expected to heal.

Even if Classic Empire doesn't take home the prize at the Kentucky Derby on Saturday, he's made more than enough money to keep him in the most luxurious straw imaginable so far. Classic Empire is the richest Derby horse to ever stand at the starting gate, with over $2 million in winnings so far. He's also called "Racing's Bad Boy" because he tends to be a challenge during training. Which means Classic Empire is a millionaire bad boy. Watch out, fillies.

At this stage of the game, Classic Empire remains the odds-on favorite to win the Kentucky Derby at 12-1. Which makes sense, because winning is in his blood; his sire, Pioneer of the Nile, also produced Triple Crown winner American Pharoah.

As the horses get ready to line up at the starting gate, it's still anyone's race, of course. But Classic Empire (whose abscessed foot has reportedly healed) seems to be at the top of his game. According to SB Nation, Classic Empire is taking over the sports books in betting circles — currently, he's a +425 favorite to win. With a name like Classic Empire, a Kentucky Derby win seems like it would fit his personality. What better empire can a racehorse leave behind?