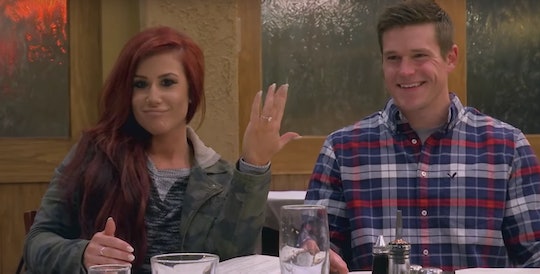 Fans who have been keeping up with the Teen Mom universe will know that a lot has happened with the OG cast since they were first introduced to the world years ago. Between marriages, divorces, drama and of course, many new babies, some may be left wondering where exactly the moms ended up. For those who have been keeping up with recent news, you may be curious about who exactly Cole DeBoer, Chelsea Houska's husband, is. The two have been married for over two years, according to In Touch Weekly, and they'll soon welcome a baby girl together.

Houska is awaiting the imminent arrival of her third child, a daughter, whom she shares with DeBoer, according to OK!. But those who haven't been following along may be wondering when she got married, and who DeBoer is. According to E! News, the couple celebrated their second anniversary last year, after legally marrying in 2016 and welcoming their first child, a son named Watson, together (Houska's second) in between.

As for 29-year-old DeBoer, according to WetPaint, he is a college graduate, and is currently employed as a traffic control specialist in South Dakota. According to In Touch Weekly, DeBoer also started his own sock line, which he frequently promotes on Instagram.

Though the couple was quiet about their relationship for a while, they're certainly not shy about sharing their romance and their lives as parents of two (and soon to be three) on Teen Mom 2 and social media now.

Fans can also tell that DeBoer is absolutely wild about his wife, as evidenced by his super sweet posts online. Just this week, OK! reported that he posted a photo of himself, Houska, and their two children, writing: "My perfect/crazy/beautiful/amazing family!! I try [damn] hard to give them all an incredible life... it would take 10 of me to actually give them what they truly deserve! Love you all more than you will ever know!"

Houska likewise seems just as thrilled to have her husband in her life. After she uploaded a selfie of them in which she called him her "best friend," fans immediately responded to share their support for her finding someone she deserves. "Congratulations, I am so happy you met Cole," one fan wrote. "I have been watching the show from the beginning. You look so happy, your daughter is crazy about him. Thanks for sharing your love story. I cried while watching because I am so happy for you and Aubrey."

Prior to meeting DeBoer, Teen Mom fans watched Houska's relationship with former partner Adam Lind, with whom she shares her eldest daughter, Aubree, as In Touch Weekly reported.

For those who have watched Houska over the years, it seems completely clear that she's found her soulmate and life partner in DeBoer, whom many fans on Instagram have noted on various photos and posts seems like an incredible father and partner. Just look at this photo of DeBoer and Aubree fishing together for proof. Or this pic of him braiding Aubree's hair. Or this adorable snap of him and baby Watson picking their noses. They're all just too dang cute.

As Houska is due to deliver her future daughter any day now, you'll definitely want to keep a close eye on the 'gram for what will undoubtedly be an adorable and sweet announcement.