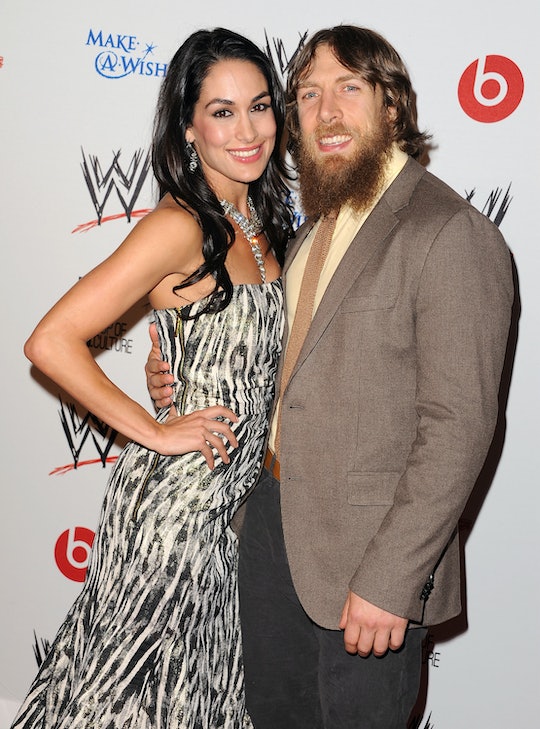 Total Bellas is about to debut its fourth season, so now seems like a good time to get up to date on the Bella twins and their families. Brie Bella has been married for several years, and her husband is a big part of her and sister Nikki Bella's reality show. That said, who is Brie Bella's husband Daniel Bryan?

Like his wife, Daniel Bryan also got his start as a WWE wrestler. After a long career in the ring, Bryan, whose real name is Bryan Lloyd Danielson, retired in February 2016. In a video interview on ESPN, he attributed the move to post-concussion seizures, which he had been suffering from for a while. Bryan also explained that he had 10 documented concussions over the course of his career, with the possibility of other concussions that were not documented, since they can be hard to diagnose.

That said, the wrestler's retirement was not a permanent one. In March 2018, Bryan announced that he was coming out of retirement, after being given a clean bill of health from three concussion experts and WWE's medical director, ESPN reported. He returned to the ring the following month, and has wrestled a slew of successful matches since then. For example, Bryan took down AJ Styles in December's WWE Championship, as per Forbes.

In addition to his wrestling career, Bryan spends a lot of time with his family. He and Brie Bella tied the knot in April 2014, according to Bleacher Report. They welcomed a baby girl, Birdie Joe Danielson on May 9, 2017. "There is no better feeling in the world than meeting your daughter. I can't even express the overwhelming joy and love that Bryan and I are feeling," Bella said in a statement shared by E! News at the time. "Now we know what parents mean about the love you feel when you first meet your child. Thank you all for your thoughts and prayers on the safety of Birdie coming into this world."

If you've ever looked at Bryan's Instagram, you know that he loves being a father. In September, he shared a photo of himself and little Birdie playing in the woods, captioned, "Heaven." And on Birdie's first birthday in May 2018, he shared a carousel of photos of himself and Birdie. "Happy First Birthday to our little Bird, who has redefined joy and happiness in my life," he wrote alongside the album. "Every parent knows the first year has its challenges, but Birdie has been such a wonderful and happy child that it always feels like a blessing. I love her sooooo much!!!"

Another passion of Bryan's is the environment. In early January, he starred in a video for WWE in which he made fun of the organization's consumerism, promotion of fried foods, and use of single-use plastics. He is also an "Amateur Environmentalist" as per his Instagram bio; he has been following a vegan diet for the better part of a decade, something he has even worked into wrestling matches when playing the villain, as Pro Wrestling Torch noted.

You can catch up with Daniel Bryan and Brie Bella on the new season of Total Bellas, debuting Sunday, Jan. 13 at 9 p.m. on E!