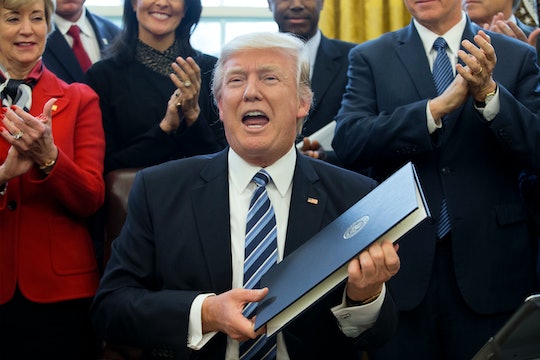 What You Should Know About David Cay Johnston

MSNBC's Rachel Maddow announced on Tuesday that she had managed to get her hands on a copy of President Donald Trump's 2005 tax return. (You remember those — the tax returns we were all told we didn't care about?) As Maddow finally sat down to discuss the contents of the tax returns Tuesday night, journalist David Cay Johnston, too, was given a little bit of the well-deserved, overdue spotlight — and for good reason: Johnston was the journalist who originally obtained the documents.

David Cay Johnston is a Pulitzer Prize-winning journalist and author who has worked for The New York Times and The Daily Beast. In 2016, Johnston published a biography about Trump called The Making Of Donald Trump, from his time covering Trump in the eighties as a journalist for The Philadelphia Enquirer. Johnston reported on Trump for nearly 30 years, and in that time uncovered an even seedier side to the president than previously suggested. A world of "mob bosses, prosecutors, and high rollers." And now Johnston, who is also a professor of business regulation at Syracuse Law University, has another claim to fame that ties him to Trump; the man who finally uncovered one of Trump's tax returns.

Trump and his administration were reluctant through his 2016 presidential campaign to share his tax returns, despite the fact that his opponent, Democratic nominee Hillary Clinton, was forthcoming with hers. The president cited an audit over and over again as the reason he wasn't sharing his returns; but once he was voted into office, he simply refused to release them. As White House senior adviser Kellyanne Conway told CNN:

The White House response is that he's not going to release his tax returns.

Unfortunately for the White House, they clearly did not plan on a skilled investigative journalist like David Cay Johnston. He sat down with MSNBC's Rachel Maddow on Tuesday to discuss Trump's 2005 tax return, which showed that Trump made more than 150 million dollars and paid less than four percent (5.3 million dollars) in taxes. Trump also paid an "alternative minimum tax" of 31 million dollars; a tax that he has said he would like to do away with as president. I'll bet.

The White House quickly issued a statement in response to the release of Trump's tax return:

Before being elected President, Mr. Trump was one of the most successful businessmen in the world with a responsibility to his company, his family and his employees to pay no more tax than legally required. That being said, Mr. Trump paid $38 million dollars even after taking into account large scale depreciation for construction, on an income of more than $150 million dollars, as well as paying tens of millions of dollars in other taxes such as sales and excise taxes and employment taxes and this illegally published return proves just that.

Whatever comes of Trump's tax return, it's journalists like David Cay Johnston who make all the difference in making facts a priority in journalism.