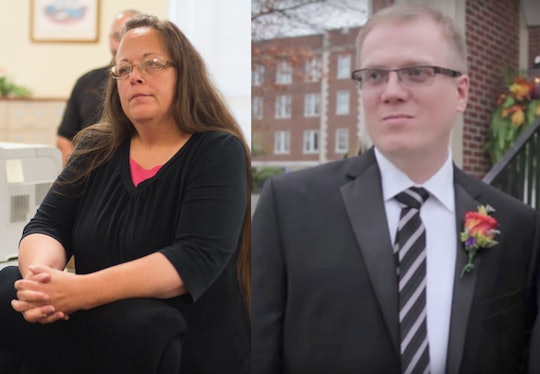 David Ermold Was Denied A Marriage License By Kim Davis, So He's Running To Unseat Her

Kim Davis has been working in the Rowan County courthouse for almost three decades. In that time, she has been largely responsible for keeping track of the Kentucky county's records. Things like real estate transactions, business licenses, and marriage licenses. Davis is, of course, rather famous for refusing to issue marriage licenses to same-sex couples in 2015. And now that situation may have come back to haunt her. Local voters are about to remember who David Ermold is; he is running for Rowan County Clerk against Davis. Two years after she denied him a marriage license.

Romper reached out to Kim Davis' lawyer for comment and is awaiting a reply.

Ermold, an assistant professor of English at the University of Pikeville, was at the Rowan County courthouse on Wednesday, seated across from Davis as he filled out the necessary paper work to take her job. It was a similar scene to the one from two years ago, when he sat in front of Davis to file for a marriage license to marry his partner of more than 15 years, David Moore. Back then, he and Moore were excited to be able to apply for their marriage license, after the June 2015 Supreme Court landmark decision, Obergefell v. Hodges, effectively legalized same-sex marriage. Back then, Davis denied them on the basis of following "God's authority."

Two years later, Ermold is back. For a little poetic justice, perhaps?

Ermold has been a resident of Morehead (where the Rowan County courthouse is located) for 14 years. He grew up in the suburbs of Philadelphia, and has two masters degrees from Morehead University; one in communications and another in English. According to his website, he has been working in the public most of his life, both in Kentucky and West Virginia. And he feels he is ready to take on the position of County Clerk, not least of which because of his past experience with Davis. As he told NBC News:

I think we need to deal with the circumstances and the consequences of what happened. I don't think the other candidates are looking at a larger message. I have an obligation here, really, to do this and to set things right.

In 2015, Ermold and Moore applied to be married not once, but four times. Each time, Davis blocked the application. Ermold filmed one of the attempts and shared it on social media. He, Moore, and Davis suddenly became central characters in a drama played out in the media, complete with politicians angling to promote their own agendas. Davis was jailed for six days and then released after a judge lifted her contempt of court ruling so long as she would not interfere in the issuance of legal marriage licences, according to The Guardian. Republican Sens. Mike Huckabee and Ted Cruz (who were both presidential candidates at the time) publicly supported her and attempted to turn her into something of a folk hero for refusing to comply with the ruling of a federal judge.

Davis has continued her work as County Clerk relatively unopposed; before she was elected in 2014, she worked for her mother, who was the county clerk for 37 years. Her lawyer, Mat Stavis, told The Chicago Tribune that he does not believe Ermold is qualified for Davis' position.

The clerk's position is more than a single issue position and that's all David has is one issue. He has no idea how to run a clerk's office. Much of what the clerk does has nothing to do with wedding licenses. It's a broad service to the public.

Ermold agrees that the job is about more than one issue. While he came in to the public eye because of his battle to marry Moore, he told The Chicago Tribune that he won't focus all of his attention on LGBTQ matters.

People ... are back home bickering and fighting with each other and fighting on social media. This campaign we are putting together is about unity and bringing people together and restoring fairness.

Whether or not Ermold will win against Davis remains to be seen; the election will not be held until May, 2018.

But in some ways that might rankle with Davis, he has already won; he and Moore are now happily married. Davis did not win.