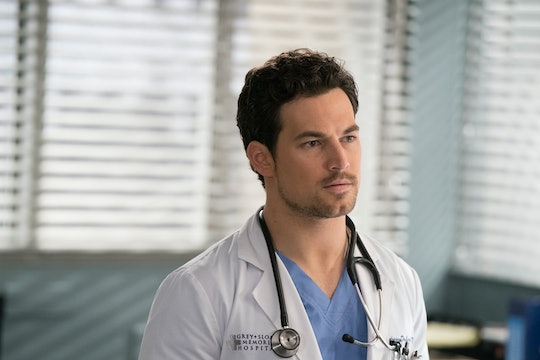 On Grey’s Anatomy, the past has a way of popping up when you least expect it. Or, in this case, in the last minutes of an episode to leave viewers hanging. DeLuca’s dad showed up in the final seconds of tonight’s big record-breaking episode and he might be the one unexpected thing to throw a wrench in DeLuca and Meredith’s future as a couple. Not much is known about the Italian surgeon so far, but DeLuca’s dad on Grey’s Anatomy does have a complicated past with his son that will likely be explored in the coming episodes.

DeLuca explained his past with his dad to Meredith when they were trapped in an elevator earlier this season and it was a big turning point in their relationship. Like Meredith, DeLuca inherited his career ambitions from a parent, but where Meredith’s mom was strict and harsh, DeLuca’s dad was always easy on his son. This is why it was so hard for DeLuca to turn his dad away when he operated on several patients while in a manic mental state. He revealed that because of his father’s connections, he was able to skirt any legal repercussions. DeLuca also said that because of his close relationship with his dad, it was hard for him to come to terms with what his father had done. Now, however, DeLuca is going to have to face those issues in a major way.

DeLuca’s dad showed up just as DeLuca and Meredith were finally going to get some much-needed alone time away from the hospital and other doctors' prying eyes. But now that DeLuca’s dad is here to shake things up and add stress to his son's life, his relationship with Meredith might be put to the test.

It’s not clear if DeLuca’s dad still practices medicine in Italy or if he’s in Seattle to escape his past back home. I don’t know if other doctors know about his previous failed surgeries due to his mental state, but I can totally see DeLuca pulling his hair out trying to keep an eye on his dad while also trying to build a relationship with Meredith. Who knows? Maybe it will actually bring them closer together. She does have some experience with a parent she needed to care for as an adult.

Giacomo Gianniotti, who plays DeLuca, recently told Parade that fans can expect to learn more about DeLuca, his sister, Carina, and their family in the coming episodes. If that means a DeLuca-centric episode, I am all for it. He might be the new Derek and if that’s the case, we need to know everything there is to know about him. I’m talking social security number, credit score, family health history, the whole nine yards. OK, maybe most fans will settle for some deep backstory. And with the introduction of DeLuca’s father, it looks like we’re going to get just that.

So far, all we know about who DeLuca’s dad is on Grey’s Anatomy is that he was a renowned surgeon in Italy and suffered from manic behavior that is apparently untreated. Earlier in the season, Carina went to Italy to check up on him, so he may or may not still be a practicing doctor. Now, he’s back in DeLuca’s life and it’s probably going to be difficult for DeLuca to get a grasp on things before it gets any easier.

As far as what this means for Meredith and DeLuca, though, it could go one of two ways. Either DeLuca’s dad distracts DeLuca so much that he has little time for Meredith and their budding romance. Or, the experience and struggle brings the couple closer together. Either way, DeLuca’s story arc just got a whole lot more interesting.